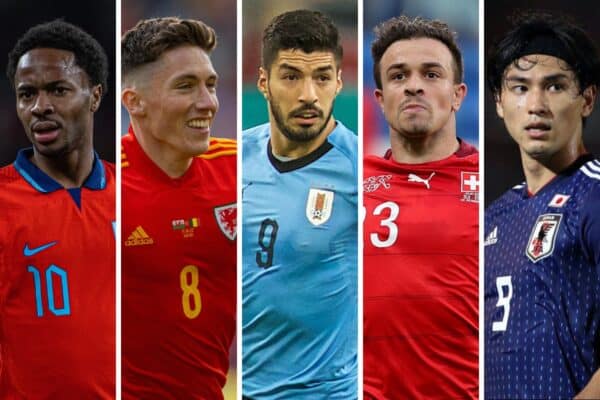 The World Cup is always the perfect time to cast an eye toward the talent the world has to offer and also check in with how a number of former Liverpool players are getting on. Qatar 2022 will be no different.

Jurgen Klopp bid seven players farewell for this year’s competition, an unusually low number of representatives for Liverpool – not that too many will be complaining.

So while the opportunities to see current players in action will be somewhat limited, you’ll have the chance to see 15 former Reds after their respective World Cup call-ups.

They represent 10 different countries between them and seven of the 15 former players came up through the club’s academy, a nod to the pathway that exists for youngsters whether they move up to the first-team or take the next step at another club.

Let’s start with the former Reds who will play alongside members of Klopp’s current team.

Conor Coady (at Liverpool between 2005-14) and Raheem Sterling (2010-2015) join Jordan Henderson and Trent Alexander-Arnold at England, both former academy members.

Former academy players Kamil Grabara (2016-21) and Liam Millar (2016-21) represent Poland and Canada respectively, with the former called into the squad after a serious injury to goalkeeper Bartlomiej Dragowski.

Ex-teammates Marko Grujic (2016-20) and Xherdan Shaqiri (2018-21) face the same fate with Serbia and Switzerland both in Group G, alongside Alisson and Fabinho‘s Brazil.

Takumi Minamino (2020-22) rounds out the list, with the Monaco man facing a stern test to progress to the knockouts with both Spain and Germany in Japan’s group.

Sadly, Sadio Mane is not on this list after injury ruled him out of playing for Senegal.