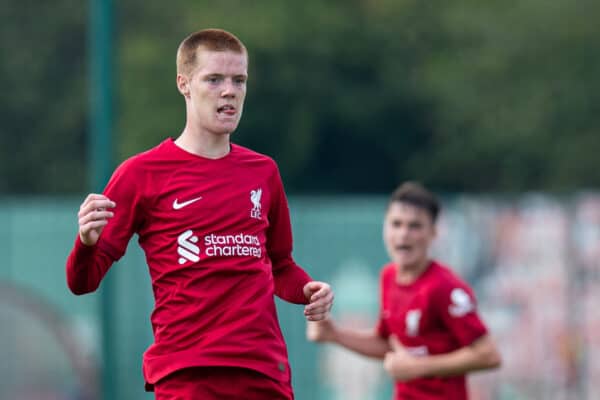 Liverpool under-18s rallied late in an attempt to come back from 4-1 down at Wolves but were left to accept a 4-3 defeat, ending their U18s Premier League Cup campaign.

After securing their place in the last 16 of the UEFA Youth League with ease in midweek, domestic cup action was on the agenda for the young Reds and Marc Bridge-Wilkinson.

Only two Reds who featured in the 5-0 thumping of Napoli, Tommy Pilling and Ranel Young, saw minutes on Saturday afternoon, with the in-form Ben Doak to be involved with the under-21s and Trent Kone-Doherty an unused substitute.

Just a week on from the defeat at Wolves in the league, it was back to Compton Park and the hosts were on the front foot early, scoring twice inside the first 19 minutes.

Liverpool turned the momentum toward the latter stages of the first 45 but much like the start to the game, Wolves struck twice in 20 second-half minutes to establish a healthy 4-1 advantage.

Fabian Reynolds and Conor McLeod’s strikes left Liverpool with little time to turn it around, with Bridge-Wilkinson turning to Cody Pennington and Josh Davidson off the bench.

And as unlikely as it felt, the young Reds did not concede defeat, instead testing Wolves‘ nerves with Elijah John making it 4-2 before 15-year-old Carter Pinnington made it 4-3 with 10 minutes remaining.

A strong finish to the match offered Liverpool the chance to complete the comeback but they had given Wolves too much of a headstart and with time not on their side.

The result means Liverpool exit the group stage of the U18s Premier League Cup with zero points, after defeats to Tottenham, Charlton and Wolves.