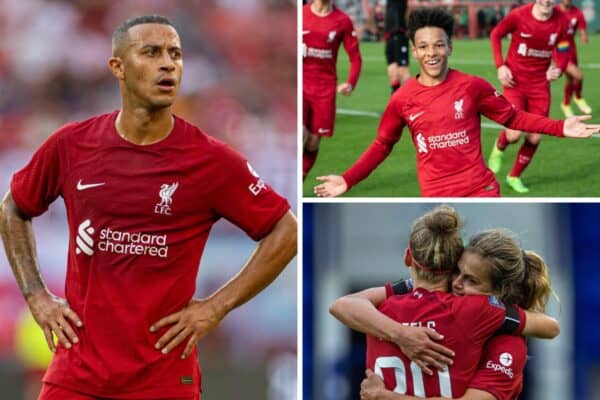 With the 2022 World Cup set to get underway later this week, Jurgen Klopp‘s first team do not play competitively again until December 22, but there are still Liverpool games you can watch during the tournament.

The Reds’ 3-1 Premier League win over Southampton on Saturday was their final league encounter until Boxing Day, when they will resume their campaign with a trip to Aston Villa.

Before then is a Carabao Cup fourth round meeting with Man City, which is now confirmed to take place on Thursday, December 22.

But you don’t have to wait that long for some Liverpool matches, with the first team, under-18’s and women’s team all in action in the coming weeks.

It’s now been confirmed that Liverpool will play two friendlies as part of the Dubai Super Cup in December.

On Friday, December 11, they face Lyon, before another game against AC Milan five days later. Both will be held at the 15,000-capacity Al-Maktoum Stadium. The games will be broadcast live on LFCTV and LFCTV GO.

The Reds will spend two weeks in Dubai between December 3 and December 17, before returning home to prepare for their Carabao Cup fourth round tie against Man City on Thursday, December 22.

Liverpool’s academy sides have been an excellent watch this season.

Marc Bridge-Wilkinson’s U18s are currently second in the U18 Premier League table, with the likes of Ben Doak, Trent Kone-Doherty and Lewis Koumas all excellent so far this campaign.

Summer arrival Doak now looks set to play most of his football with the under-21s, having featured in the first team squad in their final two matches before the World Cup break.

But there’s still plenty of talent in the U18s group, whose next match is a mini-Derby on Saturday, November 26.

The following week, their home meeting with Sunderland will be shown live on LFCTV.

The women’s season continues as normal up until a break over the Christmas period.

Matt Beard’s newly-promoted LFC Women are currently 10th in the Women’s Super League table, with their only victory of the campaign coming against Chelsea on the opening weekend.

They have, however, won both of their League Cup matches so far this season, and have five more games to play before the break.

Their next two WSL matches are live on The FA Player, before their following three matches are televised live on LFCTV.

Seven Liverpool players will feature for their nations at the World Cup, with eight others, including Mohamed Salah, called up for other internationals this month.

A number of the Reds’ loanees will also continue to play for their clubs between now and the end of the year, with the likes of Tyler Morton to return to action when the Championship season resumes on December 10.