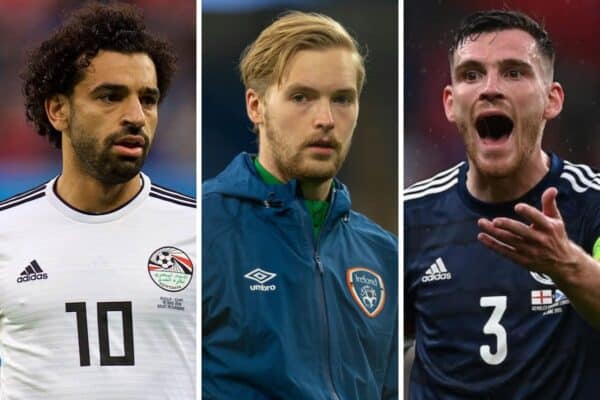 9 more Liverpool players called up for internationals – including Mo Salah

It is not only the seven Liverpool players at the World Cup who are on international duty this month, with Mohamed Salah among those called up.

The Reds have played their final game before a five-and-a-half-week break, with their next competitive fixture away to Man City in the Carabao Cup on December 22.

It comes as the domestic calendar pauses for a mid-season World Cup, with seven players from Jurgen Klopp‘s squad having departed for Qatar.

Beyond that, though, there are nine others who are set to be in international action this month.

Salah is the marquee name among those, having been included in Rui Vitoria’s 24-man Egypt squad to play Belgium in a friendly in Kuwait on November 18.

It will serve as Belgium’s final warmup before they kick off their group games at the World Cup against Canada five days later.

Andy Robertson and Calvin Ramsay are also in friendly action with Scotland, who are away to Turkey on November 16.

Caoimhin Kelleher will look to build on his heroics in the Carabao Cup last week when the Republic of Ireland host Norway (November 17) and visit Malta (November 20).

After missing out on a place in the World Cup squad, Fabio Carvalho will instead link up with the Portugal under-21s for their friendlies against the Czech Republic (November 18) and Japan (November 22).

Ben Doak is also meeting up with his U21s team-mates on Scotland duty, the teenager hoping to make another big step as they take on Iceland (November 17).

And Mateusz Musialowski joins the Poland under-21s for their clashes with Croatia (November 17) and Turkey (November 21).

Melkamu Frauendorf will be with the Germany under-19s for a friendly tournament in Malta, seeing them play Poland (November 23), Malta (November 26) and Portugal (November 29).

The rest of Klopp’s first team will now be given time off before heading to Dubai for a warm-weather training camp, with Kostas Tsimikas among those set for a much-needed rest having been left out of the Greece squad for this month.

Liverpool are due to play two friendlies while in the gulf state, with AC Milan and Lyon the opposition, though this is as yet unconfirmed by the club.