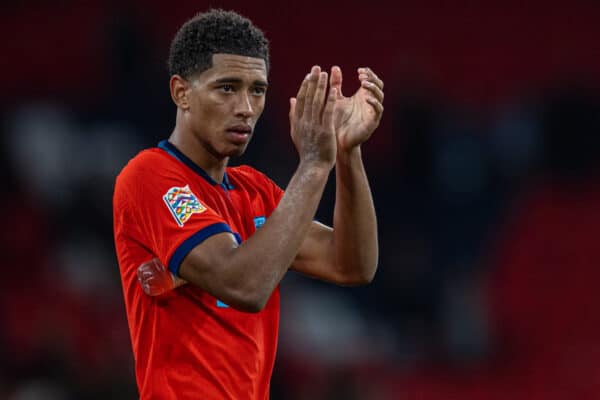 Bellingham is considered Liverpool’s No. 1 target for next summer, with sources in both England and Germany reporting Jurgen Klopp‘s determination to sign the midfielder.

It remains to be seen whether Fenway Sports Group’s decision to consider offers of investment will impact any plans for recruitment, but Klopp believes that “fresh money” would benefit the club.

There appears little chance of the 19-year-old departing Dortmund in the winter transfer window, but Watzke has told Bild-TV that talks are scheduled after the World Cup.

“I think as soon as Qatar is over, we’re going to have a basic conversation about what he actually wants,” Watzke explained, as relayed by GOAL.

“With him, with his parents, with whom we have a very close relationship and of course with his advisor.

“Either way, we’ll discuss it pleasantly and reasonably. But we don’t have to pretend that the topic isn’t on the table.”

Liverpool are not expected to be the only club in pursuit of Bellingham, with the likes of Real Madrid and Man City also in the picture.

The hope, and belief, is that there would be no major bidding war, with the player instead said to value the overall project over financial incentives.

But, either way, any deal is projected to be worth at least €100 million (£87.6m), with Watzke accepting that Dortmund cannot keep up with the “really big ones.”

“When the really big ones are there, we can’t afford to fight financially either,” he continued.

“Jude is a wonderful boy who also has his fluctuations – we’ve seen that now but he is certainly one of the greatest talents in European football.”

Dortmund certainly seem to be positioning themselves for a sale, with the club never standing in the way of a player who wishes to leave for a more established side.

Liverpool could now see this as an opening for them to push harder for a transfer ahead of their rivals, with Bellingham hopefully seeing the worth in joining Klopp’s squad over the likes of City or Real.