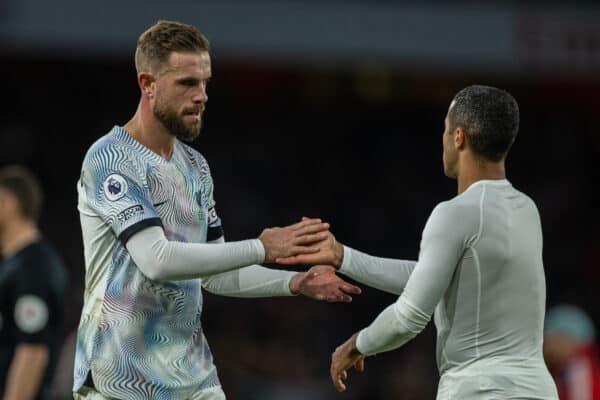 In a rough start to the season, questions were asked on the complexion of Jurgen Klopp‘s squad, and whether this successful vintage had reached the end of a cycle.

On the face of it, it feels staggering and somewhat reactionary to hear that a squad which came within two results of sweeping the lot less than six months ago are being regarded as having reached the end of a cycle.

It was a question posed to Klopp during his pre-Napoli press conference and those sentiments were echoed by Jamie Carragher following a 4-1 defeat in the reverse fixture.

Liverpool are always a story, often the story. The club’s global pull will always ensure that this is the case.

The uninspiring start to 2022/23 that destroyed any hopes of a title charge led to an inevitable post-mortem, and fingers were pointed in every direction.

It cannot simply be the case that Liverpool are underperforming, there must be a source from which the issues stem and they must be identified.

There is a demand for a cut-and-dry solution which accounts for all of the shortcomings and offers us hope for the immediate future.

This is all perfectly legitimate, too.

The standards that the side has set both domestically and across Europe give credence to that.

The manager fronts up to the media every week taking full responsibility and vows that he and his staff are doing everything within their power to put things right.

Legends with a shelf life

“I am not only here when the sun is shining,” was Klopp’s defiant response to questions regarding the team’s form.

This is something which we as supporters can all resonate with because this is a team we are stuck with for life, irrespective of short-term fortunes.

How much credibility does the ‘end of cycle’ argument have then?

Liverpool kicked off against Napoli with an average age of 28.7, and with the second-half introductions of Harvey Elliott, Calvin Ramsay, Fabio Carvalho and Stefan Bajcetic, they ended it at 24.6.

Plenty has been made of the lack of first-team members in their peak years and a number of theories have been posited as to why this is.

For all its quality and exciting young talent, it is undeniably a squad with a core of experienced players creeping into their twilight years.

The average of Liverpool players to clock 900 or more minutes in all competitions is 27.5, with Virgil van Dijk, Alisson, Mo Salah, Roberto Firmino, Thiago and Jordan Henderson all over 30.

It should be noted, though, that injuries to Diogo Jota, 25, Ibrahima Konate, 23, and Curtis Jones, 21, have played a big part in this.

But while there has been a forced overreliance on the likes of James Milner, this campaign has seen a revival of sorts for Firmino, with nine goals and four assists in 21 games so far.

That only muddies the debate when it comes to an ageing squad. Clearly, it is far from linear.

Klopp has received criticism in certain quarters for displaying too much loyalty to players who have brought him the most success, an assertion which also followed him towards the end of his spell at Dortmund.

There may well be weight to this, but there have also been numerous examples in recent years of Liverpool being prepared to let players go before they surpass that apex in their career.

The club weren’t prepared to offer a long-term deal on improved terms to a 30-year-old Gini Wijnaldum, despite coming off a season in which he featured 51 times (only matched by Salah).

Sadio Mane was sold to Bayern Munich at the same age 12 months later, following one of the most prolific spells of his career – a campaign which saw him seal a runner-up finish in the Ballon d’Or.

These were players who were adored by Klopp. They are both among the 11 most-used players throughout his entire career.

But the bigger picture might well dictate that those moves were in the best interests of the football club notwithstanding their impeccable stints at Anfield.

The philosophy was advocated as far back as Shankly, and in the necessary instances, Liverpool have shown a willingness to be ruthless.

Victims of a risk-averse regime?

Lack of investment, particularly in the midfield area, has been a source of frustration across huge sections of the fanbase for the past two summers, and perhaps a contributing factor to the fluctuating distribution of age in the first-team squad.

Reluctance to compromise on criteria led to the signings of gems like Van Dijk, Alisson and Konate, but an unwillingness to pull the trigger on plans B or C has at times made it difficult to tackle other problems in key areas.

It took penalties to edge past League One side Derby County in the Carabao Cup, a game in which the manager fielded an XI with an average age of 21.8.

A heavily rotated side in the infancy of a domestic cup campaign is nothing new, but an option to give minutes to established players on the fringes can be beneficial on such occasions.

It is no coincidence that Man City and their deeply talented squad have been so successful in the competition during the last decade.

Similar played out on the road to a domestic double for Liverpool last term, as the likes of Takumi Minamino, Caoimhin Kelleher, Kostas Tsimikas and Divock Origi played pivotal roles; two of those have since left.

There are a multitude of prospective causes, but the age profile of the squad needs addressing urgently if Liverpool are to maintain anything like the level they have upheld since 2018.

Efforts have been made in this respect, with Carvalho, 20, Ramsay, 19, and Darwin Nunez, 23, the latest long-term additions, while Jude Bellingham, 19, is the priority target for the summer to come.

Suggestions that this is the end of an era seem premature, but we know only too well how difficult it can be to keep pace with City.

The role of any potential new owners will be to facilitate an even more successful era than the last.