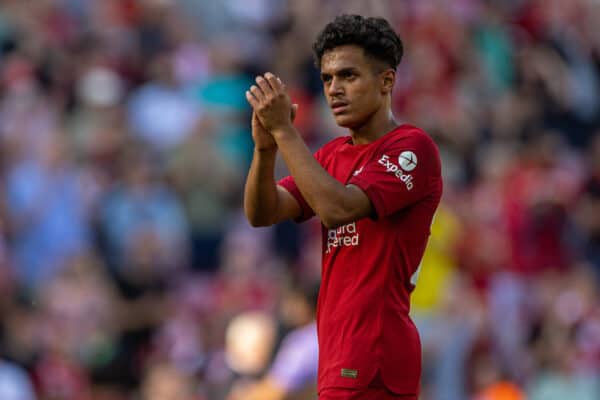 The Portuguese Football Federation has announced that Liverpool midfielder Fabio Carvalho has informed them of his decision to “give up” representing the country of his birth at under-21 level.

Carvalho was called up for Portugal U21s’ upcoming internationals with Czech Republic and Japan.

However, in a statement released on Monday evening, it was revealed that Carvalho had told the federation that he did not wish to continue representing Portugal at that level.

“Fabio Carvalho informed the Portuguese Football Federation, through some SMS messages, that he does not intend to continue representing Portugal at the under-21 level,” the statement read.

“This decision by the player was communicated after the call-up for the preparation games with Czech Republic and Japan was known.”

Carvalho remains eligible to play for England, and represented the Three Lions up to under-18s level, before swapping to Portugal in March of this year.

Since then, he has played four matches for Portugal U21s, with two goals and two assists in those games.

Last month, it was also reported that Carvalho had been selected in Fernando Santos’ provisional Portugal senior squad for the World Cup, but he did not make the final 26.

The tug-of-war is likely to continue until he commits himself at senior level, but this could be an indication that he has now made the decision to play for England.

Should that be the case, it will be interesting to see whether he is selected to play for the Three Lions’ U21s side in the near future, with Liverpool team-mates Curtis Jones, Harvey Elliott and Tyler Morton also involved with Lee Carsley’s squad in the past 12 months.

Carvalho has made 16 appearances for Liverpool since joining the club from Fulham in the summer. He has played the majority of his football on the left-side of the Reds’ attack, with his standout moment being the dramatic stoppage time winner he scored against Newcastle in August.