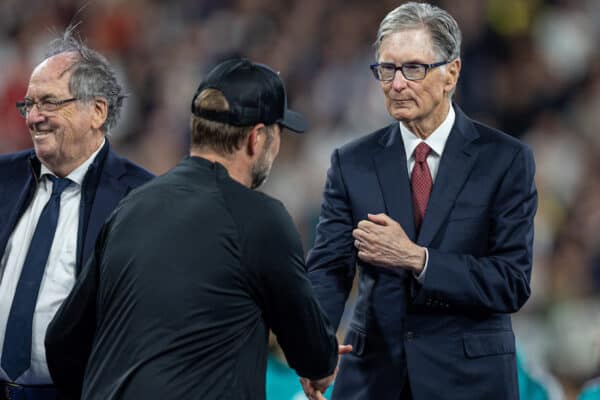 “Good chance” of Liverpool takeover but “not imminent,” says journalist who broke news

Further details of the story surrounding the potential sale of Liverpool have now emerged, with the journalist who broke the news claiming any takeover is unlikely to be “imminent.”

On Monday, The Athletic‘s David Ornstein published a story explaining how Fenway Sports Group had put Liverpool up for sale.

FSG’s statement, which was included in the article, claimed that they would consider new shareholders, but didn’t go as far as to say the club was ‘for sale’, as such.

Ornstein has now attempted to shed more light on the situation and believes that although there is “a good chance” a deal will be done, it may only happen “in the next couple of years,” rather than imminently.

“Fenway Sports Group have put Liverpool up for sale and they are open to the sale of the whole club, and that’s the difference here, because when our story came out, there was quite a lot of reaction on social media suggesting this is just what we always knew, that a part of it may go,” Ornstein said on The Athletic Football Podcast.

“And a part of it may go. It may not turn out to be a full sale, but they have invited offers for a full sale.

“They have sent out a full sales deck or presentation, documentation inviting interested parties to come forward.

“But equally, there is a good chance of it now, and they, as they said in their statement that they released to us, in the right terms and conditions and circumstances, they are open to considering new shareholders.

“They didn’t say additional shareholders, and so it’s crystal clear what’s happening here in terms of their willingness to listen.

“I’ve spoken to people around the situation that think this is not imminent, but in the next couple of years, they may get there.

“Jurgen Klopp is aware of it and that means that this situation is incredibly interesting and important.”

Ornstein went on to explain how he believes FSG are “very clear” that they will only sell the club to “the right people.”

Interestingly, he also speculated that the club’s owners may have lost the urge to try and “keep pace” with the financial wealth of the likes of Man City and Newcastle, while also bringing Michael Edwards’ exit into the equation.

“Liverpool, FSG I should say, have been very clear internally from what I’ve heard that if they’re going to sell it needs to be – to what they consider – the right people, who exhibit the right political and sporting plans, intentions, values and continue the trajectory that they have been on,” Ornstein continued.

“They may not feel that they have the ability to keep up in this arms race, and that’s certainly something that I have got the feeling of from our conversations around this story.

“Are they prepared to go for another five or 10 years and try and keep pace with these guys?

“Michael Edwards was sporting director, he decided to step aside after a decade and they listened to him in that hierarchy, still, from what I’ve heard.

“Whether it was more personal, in terms of his decision to end this cycle, or whether he felt others at the club should be doing the same, I don’t know precisely. I suspect he wasn’t alone in that feeling, and that perhaps explains a bit of this as well.”