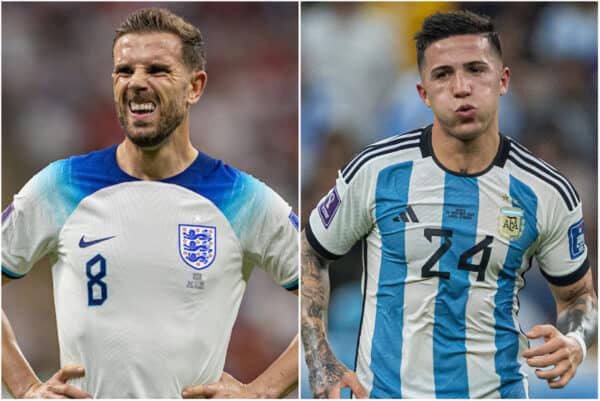 The end of a World Cup week has brought more surprise results as one former Red has inched his way toward the last 16.

Dejan Lovren and his Croatia side reached the final four years ago; they don’t look capable of going so far this time but the knockouts are within reach again.

A late sub appearance for Taki Minamino couldn’t save Japan from themselves; despite dominating, they created very little against a much more resolute Costa Rica team who scored their winner with their only shot on target of the World Cup so far.

Belgium made changes to their line-up and shape, but sadly not to their speed of play or running. They look a terribly aged and indecisive team, with Morocco eventually realising this and simply beating them by virtue of being much better on the ball.

That Group F is now looking very nice for Croatia and less so for Belgium; the two meet in the final game in what’s now a massive clash. Morocco only need to avoid defeat to go through; Belgium have no choice but to win, unless they think Canada are going to thrash the Africans.

Finally, Spain and Germany both required super subs to net for them after crossbar and offside flags intervened. A point for Hansi Flick’s side leaves them bottom with one to play.

Midfield additions seems to be the key factor to watch for in terms of the Reds this January and beyond.

We’ve already had a couple of names linked of late and now two more are being spoken about, with varying degrees of probable success according to the most recent reports.

Argentina goalscorer Enzo Fernandez is the first, with the Benfica schemer curling in a crucial strike against Mexico this week.

He has been mentioned as one the Reds had a “watching brief” on during the summer and now remains on the list of possible additions.

Elsewhere, Konrad Laimer of Leipzig is another potential target – but he reportedly prefers to stay in the Bundesliga, with a move to Bayern Munich in the pipeline.

After a World Cup defeat or exit, there are occasionally reports around the planet of die-hard fans displaying their dismay and upset in various dramatic and ill-advised ways.

Sometimes we see this mostly closely associated in nations with either massive expectations or history, or famously ferocious and passionate sporting support.

Which makes Sunday’s news of riots in Belgium all the more shocking – it wouldn’t usually be the type of nation which immediately springs to mind as a candidate for such social uprising.

Fires started, cars overturned: all the cliches were pulled out by the Brussels natives, it seems.

From the same game, it’s worth noting Morocco replaced their goalkeeper after the national anthems – clean sheet at short notice? Yes please – while Eden Hazard’s absurd comments on avoiding the politics of the tournament have been brought up after his anonymous showing in defeat.

Morocco goalkeeper Bono took part in the pre-match national anthem but fell ill and was replaced at the last minute by Munir Mohamedi.

The backup keeper kept a clean sheet as they upset Belgium 2-0 ? pic.twitter.com/0i13UbOqgP

Poor Eden Hazard. Maybe Belgium would have played better if they had concentrated on taking a stand against being silenced by FIFA.

From an LFC perspective, keep an eye on Darwin Nunez in the big and final game of the day, of course. He’ll surely be used in a more central role this time as Uruguay do need to push for victory.

Alisson will also be in goal for Brazil just beforehand, and while Fabinho isn’t a probable starter, he could get some action with Neymar out – Lucas Paqueta might be pushed forward, opening a gap in midfield.

Ex-Red Rigobert Song is the Cameroon manager who needs a result in the early game.