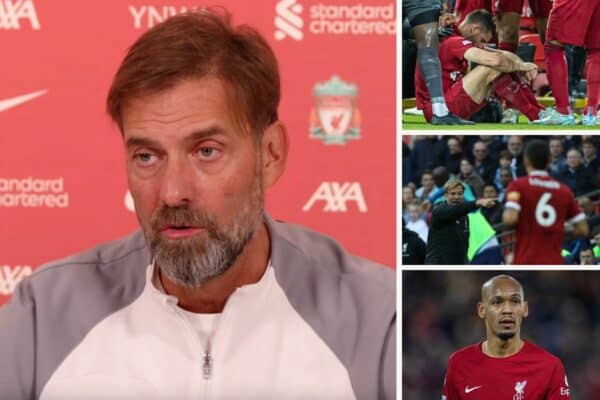 The main question marks in terms of availability ahead of this game surround Jordan Henderson and James Milner.

Henderson missed Tuesday’s win over Napoli as a precaution, but Klopp has revealed the Liverpool captain will be available on Sunday.

The same can’t be said of Milner, who is following the concussion protocol after coming off with a nasty head injury against the Serie A outfit.

“He trained yesterday completely normal. It was only a little thing.

“When you go through a concussion protocol, you are not available for the next game,” he added on Milner.

“I had Dejan in my office!”

Dejan Lovren. Tottenham away. Those words are enough to send shivers down the spine of any Liverpool supporter.

Klopp touched on the subject when recalling the Reds’ previous away matches against Spurs, revealing he had the Croatian in his office the day after hooking him off in the first half of that awful day at Wembley.

“I took Dejan off, you had to really research, huh?” he said to a reporter.

“But I remember that as well, because I had Dejan in my office the next day! But I asked him to come in, he didn’t knock on my door.”

Liverpool’s return to a 4-3-3 formation against Napoli coincided with a much better defensive performance and that, Klopp implies, was the plan all along.

Having used 4-4-2 and a 4-4-2 diamond systems for much of October, Klopp says the idea behind changing the system was to improve his side’s defensive cohesion.

“Our problem, and why we changed system, was because of the availability of players and also because we weren’t as solid defensively as we used to be,” he said.

“We tried to give them a completely new textbook…”

One player who has performed way below his usual standards this season is Fabinho, but Klopp says he was encouraged by what he saw from the Brazilian against Napoli.

That game, he hopes, will be the start of an improved run of form for Liverpool’s No. 3.

“The game was a clear sign of how we know Fabinho,” he said.

“A good game, we defended all positions on a different level to week before, so it felt good for him and very important for him.

“A good start in the right direction.”

“I hate this subject”

Don’t talk to Klopp about the World Cup. Not unless you want an angry reply, anyway!

The boss was asked about the possibility of protecting those of his players that will be involved in Qatar in the build up to the tournament.

His answer, as you’d expect, was not a particularly happy one.

“I hate this subject. These problems were so clear and nobody mentioned it once until 3-4 weeks before the World Cup,” he said.

“We are all guilty for letting it happen in the first place.”