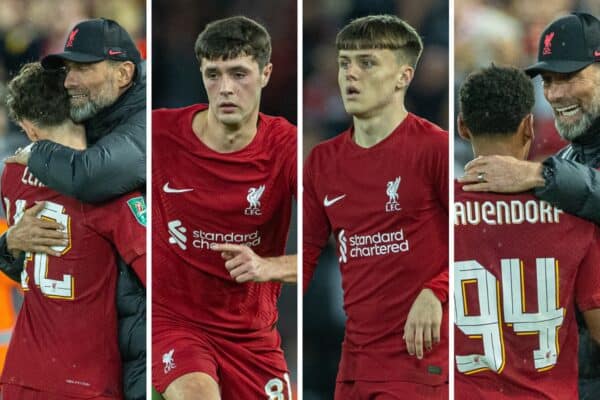 Jurgen Klopp handed five young Reds their first start for the club and a 16-year-old his debut off the bench, making for an Anfield night that was “priceless.”

It was not always easy on the eye and Liverpool were left to do it that hard way once more – some things never change – but Klopp’s side are in the hat for the fourth round of the Carabao Cup.

Caoimhin Kelleher was the hero in the shootout – some things never change – leaving Derby to bow out as the Reds celebrated in front of a sell-out crowd.

The occasion had significant meaning for Layton Stewart, Bobby Clark, Stefan Bajcetic, Calvin Ramsay and Melkamu Frauendorf, as they all made their maiden starts.

They were later joined by 16-year-old Ben Doak off the bench, with the spotlight again on the club’s impressive youngsters, some of whom were left “speechless” after the experience.

Stewart was just that after leading the line for Liverpool for 66 minutes, a dream come true for the Scouser who has endured rotten injury luck throughout his youth and watched others live his dream, but Wednesday night it was his turn.

“I think it’s the first time in my life I’ve ever been speechless. When I walked out my whole body went stiff, I just knew that my mum and dad would be in the crowd absolutely buzzing,” Stewart told LFCTV.

“A couple of lads got their debuts when I was injured but when the time came, I took it.

“It was a tough road for me and then to come back and I think I’ve done well this season and to get an opportunity like that was priceless.

“[I found out I was starting] yesterday, we had a meeting about the team, the shape and he just went through and named the team and I was in it, and, again, my body went weird – I didn’t know what to do.

“I went home and told my mum and dad, best feeling ever.

“I have dreamt of this since I knew what Liverpool was. I come week in and week out and watch them and to step foot on the pitch at Anfield was, again, I don’t have words to describe it.”

Stewart’s experiences were not too dissimilar to the youngsters he shared the occasion with, and safe to say they all hope for “more to come”:

It’s a night none of them will forget and with a place in the next round secured and to be played before Christmas, they’ve each given themselves a chance to feature once again.