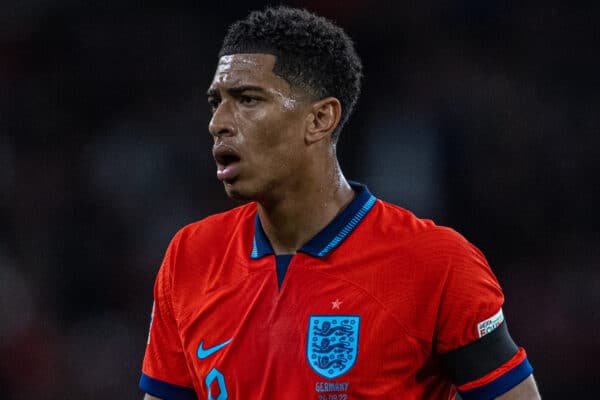 With another transfer window approaching and Liverpool in need of another midfielder, reports linking Jude Bellingham with a move have resurfaced.

The Reds have three more games before a long winter break for the World Cup, with Jurgen Klopp due to take his squad to Dubai for warm-weather training.

Those not on duty at the tournament in Qatar will take in friendlies against AC Milan and Lyon, while in the boardroom, work will continue on additions to the squad.

Reports from Sky Germany’s Florian Plettenberg claim that while “top transfers” are planned for the summer, there is an expectation that a new midfielder will be brought in mid-season.

Soon after, Plettenberg brought exclusive quotes from Klopp’s agent, Marc Kosicke, suggesting that he was also the source of the information on recruitment.

It is no surprise that, ahead of the winter window, speculation has mounted over a deal for Dortmund’s Bellingham again, but it is interesting that Liverpool are still positioned as favourites.

German publication Sport Bild claimed on Wednesday that the club had resolved to go “all in” on the 19-year-old, though there was a disparity between their funds at €100 million and a rumoured price tag of €150 million.

However, ESPN have brought further claims on Friday, with Liverpool “viewed as the favourites” and “leading the chase” on a deal that could be worth “towards the lower number.”

The report cites “multiple sources” and adds that, despite Chelsea, Man United, Man City and Real Madrid all hoping to secure a transfer, the Anfield club “are forging a close relationship with the player’s camp which could prove a significant factor.”

This was backed up in the week by Sky Sports‘ Melissa Reddy, while insider Jan Aage Fjortoft also claimed that “one club is working very hard behind the scenes to make this deal happen.”

“Another source said the broad framework of a deal to take Bellingham to Anfield may even be advancing,” the ESPN report adds.

“Although both the player and his father, Mark, have previously publicly dismissed the idea a decision on his next club has been made.”

It is even mooted that the England international could depart Dortmund as early as January, though it is “far more likely” that the transfer takes place in the summer.

Liverpool are said to be “willing to commit a huge sum to land him,” though it is rightly noted that “failure to qualify for next season’s Champions League would place a significant strain on their finances.”

RB Leipzig midfielder Konrad Laimer has been touted as another target, and with less than a year remaining on his contract he may be a more viable mid-season arrival.

But if ongoing reports are to be believed, perhaps a deal for Bellingham could then be lined up ahead of 2023/24.