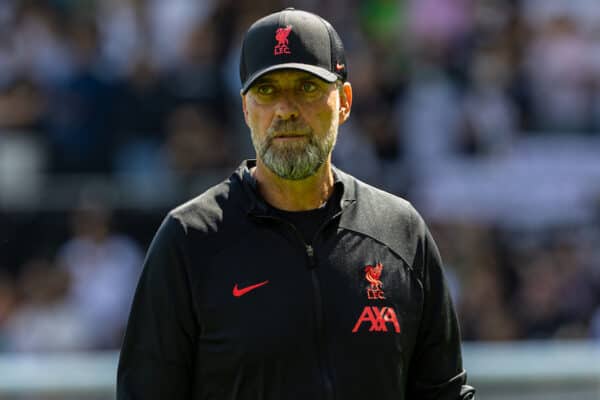 Though owners Fenway Sports Group are exploring the possibility of selling Liverpool, Jurgen Klopp insists transfers plans are going ahead as normal.

Following the news that FSG are seeking further investment into the club and weighing up its sale, Klopp has stressed that he is fully committed to his role as manager.

Despite enjoying a close relationship with those within the ownership group including John W. Henry, Tom Werner, Mike Gordon and Billy Hogan, he is purely focused on matters on the pitch.

That, of course, includes plans for the recruitment of players to bolster an injury plagued squad, with the hope being that at least one signing is made in January.

Asked whether speculation over the future of the club would see FSG limit their spending power in the transfer market, Klopp suggested that plans will go ahead.

“It’s not about money or whatever. It’s definitely going on, that’s clear,” he said.

“I’m very positive about the whole thing. Either way it will be fine.

“I really have a really close relationship with our owners, which means I always knew what we can do, what we can’t do, all these kinds of things.

“It’s not that I ask for something, they say ‘no’, and then I stop asking. Before we speak to you there are plenty of discussions.

“Now we have to see what we do. There’s nothing decided or whatever, what we will do in the winter, yes or no.

“We have to see. We have time until then, obviously, but we follow the market all the time, every day.

“There’s no player in the world who scores a goal and we don’t know it. If somebody makes a save, we know it.

“That’s the situation. That’s what will go on. That’s clear.

“But all the rest, we are not involved, obviously. That’s OK. We have to focus on football and that’s what we do.”