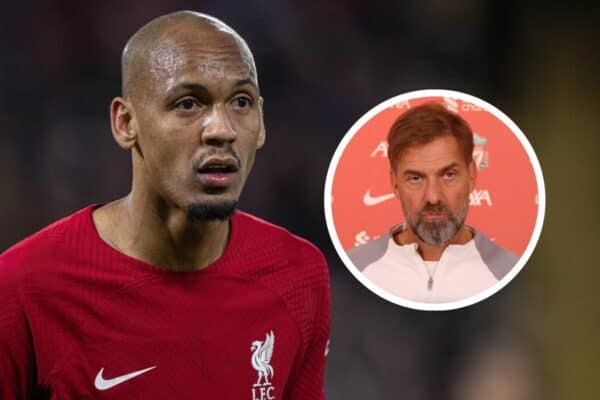 Fabinho is one of several Liverpool players who haven’t performed to their usual standards this season, with Jurgen Klopp explaining why the Brazilian has kept his place in the team despite a “dip” in form.

Since his arrival at the club in 2018, the 29-year-old has played a huge role in all of the club’s recent success, developing into one of the best holding midfielders in world football.

But Liverpool’s indifferent form has left Fabinho looking a shadow of the player we have become used to seeing, with Klopp acknowledging his struggle for consistency in his pre-Tottenham media duties on Friday.

The Reds’ boss was more encouraged by the midfielder’s performance in Tuesday’s 2-0 victory over Napoli, believing it was “a clear sign” that he is getting closer to his best.

Klopp opted to revert back to his tried and trusted 4-3-3 system against Luciano Spalletti’s side, a formation that Fabinho had previously struggled in earlier this season.

The German said he did not have an explanation for Fabinho‘s below par performances, but does not think Liverpool’s changes in formation has been a factor.

“No, no real explanation, and no it’s not because of the system, I’m pretty sure that’s not an explanation,” Klopp said.

He then went on to imply that he would like to have taken Fabinho out of the firing line more often this season.

Had Liverpool signed first-choice midfield target Aurelien Tchouameni in the summer summer, the Brazil international would not have been relied on so heavily this season.

But with no other natural holding midfielder at the club, aside from 18-year-old Stefan Bajcetic, Klopp has had no option but to continue to select him.

“Not much,” the Liverpool boss continued when asked if the ex-Monaco midfielder has spoken to him about his struggle for form this season.

“In a long career, players have ‘dips’ in performance, that’s completely normal.

“Usually you sort that by not playing that often, stuff like this, but because of our situation, Fab had to play through everything. You get through it, and at one point you are back to yourself, that’s how it is.

“If we have other options, which we use more often than in other seasons, then we use that to give him the chance to recover completely from the last game or whatever.”

Whether Fabinho‘s form has had a negative effect on his chances of making Brazil’s World Cup squad remains to be seen, with Tite set to confirm the players that will go to Qatar early next week.

But at club level, Liverpool will be hoping they have the Fabinho of old when they reconvene for the second half of the season.