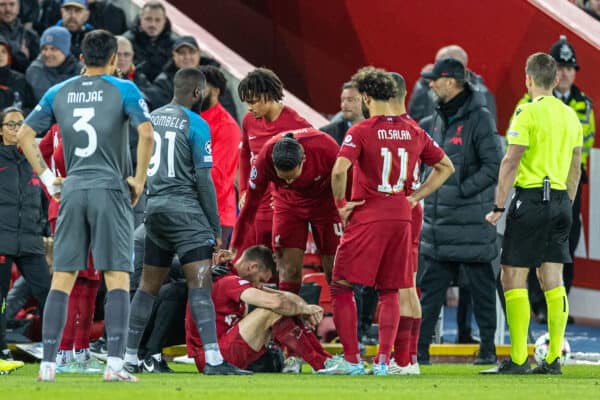 Jurgen Klopp has delivered an update on James Milner, who was brought off against Napoli with a head injury, revealing that he “seems to be fine.”

Milner was one of four players coming in as Liverpool took on Napoli in the final game of the Champions League group stage, captaining the side at Anfield.

The veteran produced an all-action display in the right-sided midfield role, but took a blow to the side of the head late on in the first half which drew blood.

After receiving treatment on the pitch, Milner was able to carry on – but though he emerged for the second half, he signalled to come off just one minute after the restart.

Harvey Elliott took his place, with there seeming to be swelling and discolouration on the 36-year-old’s forehead, which rightly led to concerns over a possible concussion.

But speaking in his post-match press conference, Klopp explained that Milner “seems to be fine,” though in line with protocol, more tests will be required.

“I don’t know,” he admitted. “He seems to be fine now, but we have to probably do further checks.”

Any issue for Milner would add to a raft of injuries within the Liverpool squad – and particularly the midfield ranks – but the priority should be the player’s wellbeing.

At the weekend, Aston Villa goalkeeper Emi Martinez was allowed to play on after a blow to the head which later saw him leave the field and replaced by a concussion substitute, with the Premier League demanding an explanation from the club.

That led to a bigger focus on head injuries again, with Tottenham forward Heung-min Son taken off during their 2-1 win over Marseille elsewhere on Tuesday night.

Tottenham‘s medical staff should be lauded for a brave decision, under pressure given the significance of the tie and Son’s importance to the side, as much as Villa’s should be scrutinised.

But the Milner situation shows how difficult it can be to judge when it comes to head injuries, as was the case during the 2018 Champions League final with Loris Karius.

Guidance from the FA is ‘if in doubt, sit it out’, but there are countless other factors in play – not least the player’s own desire to keep playing – and it is clear more needs to be done to normalise protection.