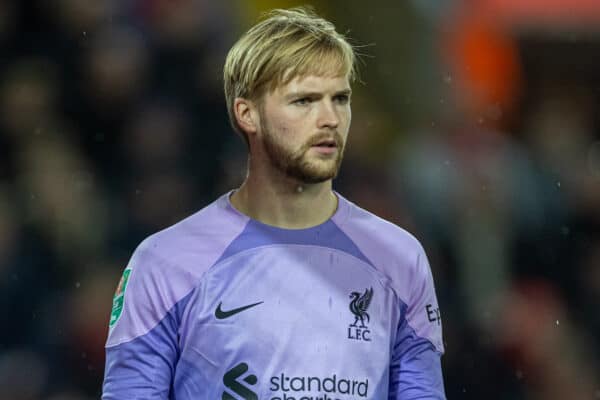 Jurgen Klopp “over the moon” for “exceptional” Caoimhin Kelleher

Caoimhin Kelleher pulled off more heroics in a penalty shootout as Liverpool overcame Derby on Wednesday night, with Jurgen Klopp “over the moon.”

With a 0-0 draw played out between Liverpool and Derby at Anfield, the Carabao Cup third-round tie was left to be settled by a shootout.

Erratic Derby goalkeeper Joe Wildsmith saved the opening spot-kick from Stefan Bajcetic when he was three yards off his line, before Kelleher produced legal stops against Conor Hourihane, Craig Forsyth and Lewis Dobbin.

Liverpool won 3-2, with their No. 2 the hero once again – becoming the first goalkeeper in the club’s history to win four penalty shootouts.

“In history? Wow!” was Klopp’s response, when told of Kelleher’s record feat.

“Let’s just talk about tonight. I can’t remember the others, of course they were good as well, but tonight there were three really good penalties.

“They all go in the corner, so it’s not like it’s a bad one, they mishit the ball or slip a little bit before they shoot.

“No, they were really good and he saved them anyway, so that’s massive.”

Kelleher’s latest triumph came in only his 18th appearance for the club, also breaking Pepe Reina’s record with a sixth penalty save in a shootout.

It highlights the difficult situation Klopp faces with Alisson‘s deputy, who he hailed as an “absolutely exceptional” product of Liverpool’s goalkeeping conveyor belt.

“I think we never hold it back, say ‘oh Caoimh, he could not play’. No, he’s exceptional. He’s absolutely exceptional,” the manager added.

“He had now not the best season so far, because he came back from holiday and was injured.

“It took a really long time to get him back in training and back to speed. But he’s obviously ready now.

“The goalkeeper coaches are just doing an incredible job. He’s just – and I’m pretty sure he would say it the same – their product.

“What they do with him and the goalkeeper they developed is a modern goalie.

“Calm as you like, can play football, and on top of that can catch balls and keep the ball out of the net in a really good manner.

“That’s really good and I’m over the moon for him that he could have these situations.

“When you see him, he’s a very grounded boy. He barely smiles, but when he smiles you know it means a lot to him. So, really cool.”