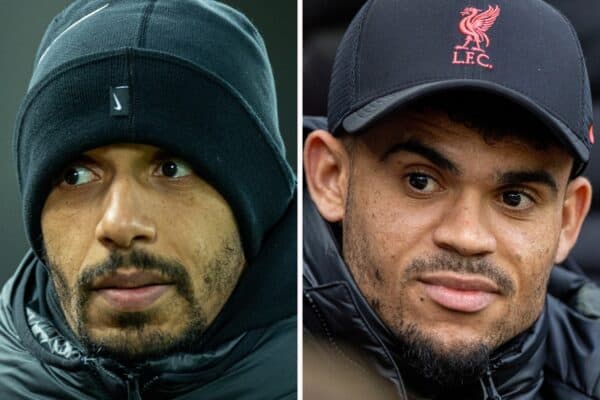 Jurgen Klopp has delivered a positive update on the Liverpool players who have been sidelined of late, with Joel Matip back and Luis Diaz edging closer.

The Reds wrap up the first half of the season on Saturday, hosting Southampton in the Premier League, and will be hoping to leave their issues of the opening period behind them when play resumes.

Dogged by injuries throughout the campaign so far, including a number of long-term layoffs, the situation appears to be easing for Liverpool heading into the World Cup.

In his pre-match press conference on Friday, Klopp gave an update on those nearing a return, with Matip back training along with James Milner and Diaz not far off.

“Nobody’s out from the players we had available for midweek, or the last game [against Tottenham],” he explained.

“Milly’s back in training today, Naby is out and running, Lucho is back on the pitch and running.

“Joel trained with us, was in three-quarters of the session, but the last bit he didn’t do. He’s now obviously available as well.

“He would be available [if needed], but only trained once with the team.”

Earlier, Klopp looked ahead to a mid-season training camp in Dubai and the return to play against Man City in the Carabao Cup, naming Diaz as one of the players he should have available.

Beyond those mentioned, Diogo Jota is still out for the long term, while no return date has been set for Juventus loanee Arthur, who underwent surgery at the start of October.

Klopp is likely to make another 11 changes from the Carabao Cup victory over Derby, with his strongest possible side expected against Southampton.