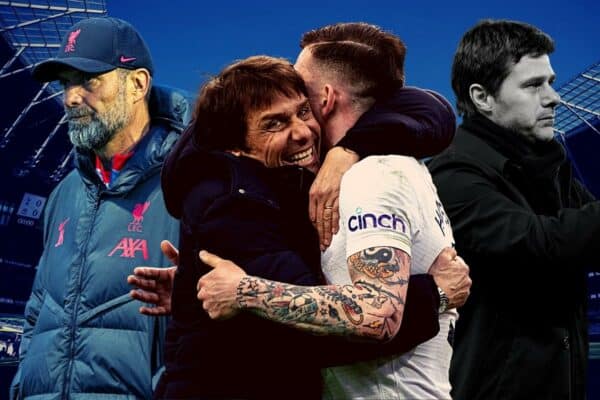 Liverpool and Tottenham lock horns in north London on Sunday, with Spurs fans confident of piling more Premier League misery on the Reds.

Jurgen Klopp‘s side suffered an awful 2-1 defeat at home to Leeds last weekend, leaving them in ninth place and with a huge amount of work to do in the top-four race.

This weekend, Liverpool face a massive challenge, as they take on a Spurs team sitting third in the Premier League and sensing blood.

It hasn’t all been plain sailing for Antonio Conte’s side, however, and Klopp will hope for a result more akin to the midweek win over Napoli than the Leeds nightmare.

We spoke to the Evening Standard’s chief football correspondent Dan Kilpatrick (@Dan_KP) to hear all about Spurs’ season, his take on Liverpool’s issues and much more.

How happy are you with Spurs’ start to the season?

Tottenham are through to the Champions League knockout rounds as group winners and should be well-placed in the top four when the Premier League pauses for the World Cup.

Results have been better than performances, but given the schedule, that is excusable.

What’s your current stance on the job Conte is doing?

Again, it’s hard to complain, considering the state of the club when Conte took over.

It was less than a year ago that they failed to get out of their Europa Conference League group.

Many fans grumble about the football and would like the team to spend more time on the front foot, but Conte has always been a relatively low-percentage coach who gets results.

Plus, it doesn’t feel too far away from clicking again, so I expect they will be more fluent after the World Cup.

The midfield two, Pierre-Emile Hojbjerg and Rodrigo Bentancur, have been the players of the season so far.

They are really stepping up in the final third, too.

By his own standards, Son Heung-min has been disappointing – he has played in every game, but only scored in two of them. Now, he faces a spell out after facial surgery.

As for Liverpool, how do you assess their campaign?

I’m reserving judgement because I think it’s impossible to compete in the league and the Champions League at full intensity with this schedule.

Spurs, Chelsea and Liverpool have all been patchy – Man City have the advantage of being owned by a state – so the second half of the season will be a better indicator.

That said, Liverpool do have the air of a team coming to the end of a cycle under Jurgen Klopp.

Spurs went through it with Mauricio Pochettino and some of the signs are familiar.

The second half of the season is so unpredictable, but as it stands, I will say that Spurs will finish in third place and Liverpool will be sixth.

Which Liverpool player would you most like to have at Spurs?

I know he’s not shone as a wing-back for England, but I’m sure Conte could sort that out and it’s a problem position for Spurs.

Looking ahead to Sunday, where will the key battles take place?

Virgil van Dijk vs. Harry Kane is an obvious key battle, given their quality.

I also think that Spurs’ wing-backs up against Liverpool’s full-backs could go a long way to deciding the outcome.