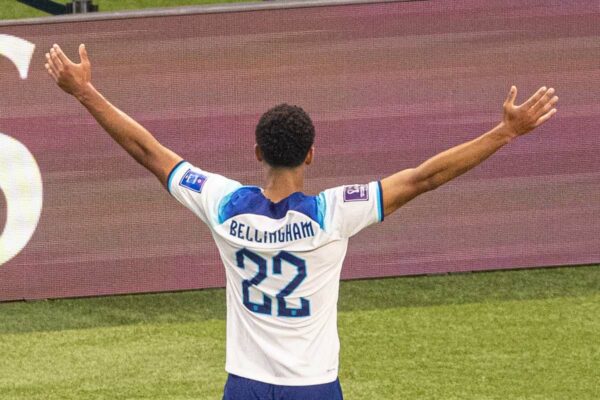 Jude Bellingham was a standout for England in their opening World Cup 6-2 win over Iran, leaving Liverpool fans all to share similar thoughts over the club’s much-discussed transfer target.

Reports of Liverpool’s interest in Bellingham are not hard to find, with the 19-year-old widely regarded as the club’s No. 1 transfer target for next summer.

He will demand a hefty fee, though, even if Borussia Dortmund are accepting of the fact that they “can’t afford to fight financially” for the midfielder.

But that will also pertain to Liverpool with any deal to be in excess of £90 million, a fee that many feel will be hiked if his opening World Cup outing is anything to go by.

Bellingham opened the scoring for England with a well-timed header before going on to dominate in midfield, ending his game with a 96.8 passing accuracy.

Appreciating the talent but realising that's another £10million on the price tag pic.twitter.com/uJvAmS2PAF

FSG speeding up that sale as we speak, knowing Klopp is going to ask for Bellingham when the World Cup is over ?

Getting himself and the #ThreeLions off the mark.

Just another few million added to Bellingham’s price tag there….

When you’re happy for a lad who Liverpool want to sign then realise he just added £25m to his price tag pic.twitter.com/94yVwIYxdP

So, you like assists from full backs, Jude? I know JUST the club for you

That’s another 10 million added to the Bellingham price tag…

My god I want that lad at Liverpool.

Jude Bellingham gets better every time I see him play. He’s 19 and he’s virtually the complete midfielder #FIFAWorldCup

This Bellingham performance would make a lot more sense if he was about seven years older.

Liverpool are certainly not alone in their interest, with Real Madrid and Man City both credited with being in the mix for his signature.

Bellingham’s goal was the first of six for England against Iran, with Bukayo Saka scoring twice, ex-Red Raheem Sterling finding the net, as too Marcus Rashford and Jack Grealish.

There were no minutes to be had for Jordan Henderson nor Trent Alexander-Arnold, as Gareth Southgate instead turned to Rashford, Eric Dier, Grealish, Phil Foden and Callum Wilson off the bench.