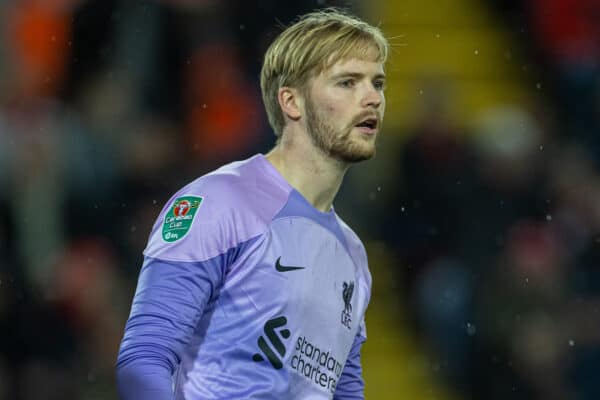 Liverpool beat Derby on penalties to reach the fourth round of the League Cup, with supporters hailing the brilliant Caoimhin Kelleher.

Jurgen Klopp made 11 changes to the side that won 2-1 away to Tottenham last weekend, with five youngsters making their full debut and 16-year-old Ben Doak coming off the bench.

A dour encounter saw chances come and go, but a penalty shootout was required to decide who made it into the last 16.

It was a good night overall for Klopp’s men, with rivals Arsenal, Spurs and Chelsea all bowing out of the Carabao Cup.

Reds supporters took to social media to hail Kelleher’s contribution and praise the young Reds who took their chance.

The Irishman’s quality in shootouts was rightly lauded…

We have the best and the 2nd best Goal Keepers in the world! #LFC ?

“We’ve got the best PK stopper in the world.” – Mark Viera on Facebook.

“Sometimes I envy us for having such a great 2nd keeper” – Divock on the forums.

22.22% of Caoimhim Kelleher's Liverpool appearances have ended in him winning his team a penalty shootout. Not one hair out of place throughout.

And the young Reds showed what they were about

“I thought Bajcetic, Clark and Kelleher were excellent. Ben Doak for his short appearance looks off the scale good. Time the old guard Milner, Ox, Keita moved out and these young ones were brought in. I would love to see them getting a chance than Ox and Keita especially.” – John Gardner on Facebook.

“Doak looks like he’s going to be a special player. He was fearless, always wanted the ball and immediately showed his qualities.” – Atlas2901 on the forums.

Ramsey is the major plus, because he looks physically ready whilst being extremely confident on the ball.

Doak is fearless. Bajcetic promising, but will need time.

Keheller too good as a number 2, so need to appreciate him whilst he’s here.

Ramsay’s just got it, hasn’t he? Only takes one game to see it with some players.

I absolutely love players who just want to commit defenders, be brave and run at them. Ben Doak only has one thought in his mind every time he gets the ball ?#LIVDER

Ben Doak reminds me of Raheem Sterling breaking through.

It wasn’t a classic at Anfield, but ultimately, Klopp will look back on this as a hugely positive night for his fringe players.

Granted, Klopp may not have been devastated to bow out, given the relentless schedule in 2023, but there is a trophy on offer and competition has opened up.