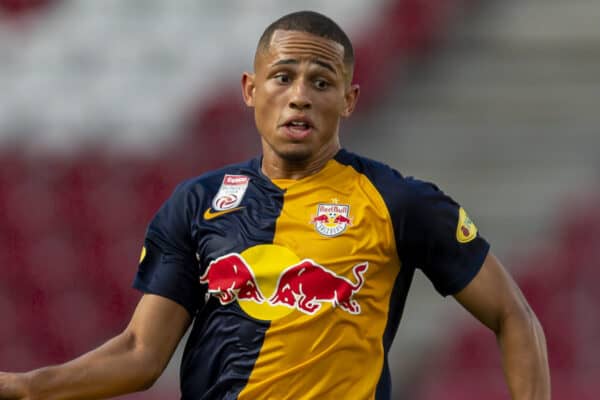 Liverpool are among the clubs said to be interested in Salzburg striker Noah Okafor, with the club’s sporting director not ruling out a January transfer.

Okafor has emerged as the latest in the production line of prolific forwards at Salzburg, following the likes of Erling Haaland, Patson Daka, Karim Adeyemi and Benjamin Sesko.

More often than not, those who stand out at Salzburg earn moves elsewhere, with Sesko the latest example in graduating to RB Leipzig with a 2023 move agreed.

It appears as though the Austrian club are already preparing themselves for Okafor’s sale, with sporting director Steffen Freund admitting he is “not ruling out” a deal as soon as January.

That comes after a report from Sky Germany claiming Liverpool, along with Man City, Man United and AC Milan, have already “expressed an interest” in the 22-year-old.

Okafor has scored 10 goals in 22 games for Salzburg so far this season, and is part of the Switzerland squad for the World Cup.

Freund, speaking to Sky Germany, outlined a hope that a standout tournament could lead to concrete interest in a player who is said to be valued at between £30 million and £35 million.

“I hope that Noah plays a good World Cup, then the Okafor stock could be very interesting in the winter,” he said.

“He doesn’t have to change, but it could be the next step…I am not ruling it out.”

Okafor joined Salzburg from Basel in 2019, and was part of the side that drew 2-2 with Liverpool in a pre-season friendly in 2020.

His role has increased over the past two seasons, and he now leads the line alongside Junior Adamu, scoring in three consecutive Champions League games against AC Milan, Chelsea and Dinamo Zagreb this season.

He is quick and versatile in his role up front, able to drop deep and link up play as well as drifting wide and running behind defences, and his finishing is swiftly improving.

Where he would fit into the Liverpool squad is unclear, particularly given reports of a new contract for Roberto Firmino, but injuries to Luis Diaz and Diogo Jota this season show that more depth could be a benefit.

Okafor could be seen as one for the future, with recruitment focusing on players in their early 20s or younger, though there is no suggestion yet of an imminent move.