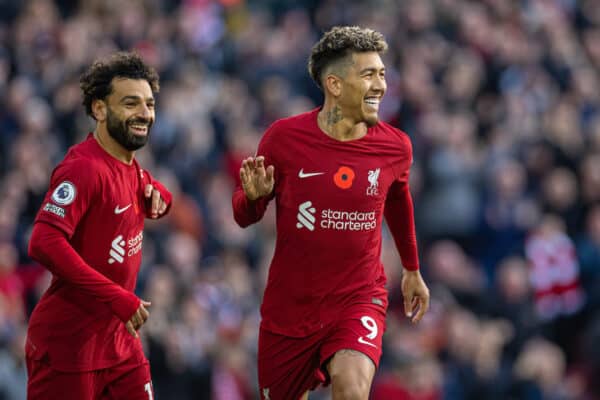 With his existing deal due to expire this summer, Roberto Firmino could be set to extend his Liverpool contract beyond this season, with talks said to be “progressing very well.”

Many had expected this to be Firmino’s last season at Anfield, with a series of injuries seeing him play a bit-part role in the previous campaign.

However, Firmino has been one of the standout performers in Jurgen Klopp‘s side in 2022/23 so far, having already scored nine goals in all competitions.

His good form has prompted suggestions that he could earn himself a new contract, and a reliable journalist has now reported that could be the case.

According to Sky Germany‘s Florian Plettenberg, who has close links with Klopp’s agent, Firmino’s contract talks are “progressing very well,” but with “no final steps at this stage.”

Update #Firmino: Been told that talks about a new contract beyond 2023 are progressing very well. But no final steps at this stage. Player can really imagine to extend. Relation with Klopp should be perfect. #LFC @SkySportDE ?? pic.twitter.com/csQoCDir4N

Plettenberg adds that Firmino “can really imagine” extending his time on Merseyside and has a “perfect” relationship with Klopp.

Given Firmino’s good form, it would be no real surprise to see the club offer him fresh terms.

Should he commit his future to the club, there’s still every chance Liverpool will look to strengthen their attacking options, with Plettenberg also linking the Reds to Red Bull Salzburg forward Noah Okafor.

The Austria striker, who can play in several positions across the front line, is also said to be interesting Man City and AC Milan among others, with Plettenberg claiming a winter transfer could be possible.

X News #Okafor: Transfer in winter is possible! No negotiations now but there’s is an interest from clubs like #MCFC, #LFC & AC Milan. Been told that United is not in. World Cup very important now. Price tag could be around €35-40m. Top season with Salzburg so far. @SkySportDE?? pic.twitter.com/Lqx0xmznQ4

Okafor is set to feature at the World Cup with Switzerland, and could certainly be a player to keep an eye on from a Liverpool perspective.

Firmino, however, won’t be in Qatar, having narrowly missed out on a place in Tite’s final 26-man Brazil squad.

When quizzed on the subject last week, Klopp admitted Firmino was disappointed by his omission, but it certainly didn’t seem to affect his form on the pitch, with the Reds’ No. 9 scoring Liverpool’s opener against Southampton.

Klopp was also asked about a potential new contract for Firmino last week, to which he claimed there were “normal conversations” ongoing and that “we will see what happens there.”

Plettenberg’s story would certainly suggest that there is a good chance Firmino will eventually extend his contract, and given his performances this season, you can’t say he wouldn’t deserve it!