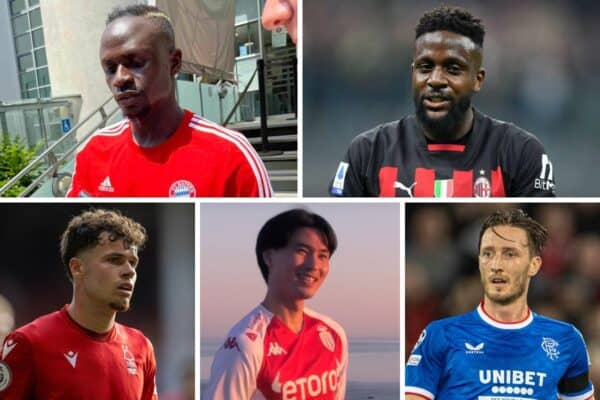 There were several high profile exits from Liverpool in the summer transfer window, so with the mid-season break for the World Cup now upon us, how are the Reds’ most recent departures getting on so far?

Having won every trophy available to him in the six years he spent with the Reds, Sadio Mane‘s decision to leave Liverpool for Bayern Munich was the headline outgoing in the previous transfer window.

Divock Origi, Takumi Minamino and Neco Williams, all of whom played roles in Jurgen Klopp‘s success at the club, also moved on, while Liverpool also made good money from the sale of Ben Davies to Rangers.

There were also several other players who left having reached the end of their contracts, before other teams took the opportunity to sign them up for free.

Here, we take a closer look at how Liverpool’s most recent outgoings are getting on with their new clubs.

Mane began the season in a central attacking role for Bayern, the position Klopp used him in for the majority of the second half of the previous campaign.

With five goals in his first five games for Julian Nagelsmann’s side, the Senegal forward made a positive start to his time in Germany.

The last couple of months have been a bit more challenging, with Mane playing on the left side of Bayern’s attack more often, and receiving criticism for his performances from some quarters.

After Mane was hooked off in Bayern’s Champions League win over Barcelona in September, Nagelsmann was forced to explain the forward’s drop in form, suggesting that it was partly due to his exploits for Liverpool last season.

“Asked about the 30-year-old’s puzzling slump in form, Julian Nagelsmann cautioned that the forward still needed to adjust to Bayern’s game and had not played much on the left for Liverpool last season. Both are true but did not explain Mane’s weirdly static game. Worryingly, Nagelsmann seemed to imply that the problem is physical rather than tactical when he added that the player had ‘put in so much for Liverpool’.”

Raphael Honigstein for the Athletic in September

With his goal tally now up to 11 for the season, Mane featured in all of Bayern’s matches before picking up an injury to his fibula earlier this month, a problem which is expected to limit his involvement at the World Cup.

The 30-year-old has helped Bayern to a four-point lead at the top of the Bundesliga, with the Bavarians also the only side to win all six of their Champions League group matches.

A mixed, but largely positive start to life in Germany for Sadio.

With Origi reaching the end of his Liverpool contract last summer, the Belgian’s move to Milan was football’s worst kept secret in the closing months of the 2021/22 campaign.

Just as he did at Liverpool, Origi has racked up most of his minutes for Milan off the bench, with Stefano Pioli preferring to use Olivier Giroud as his first-choice striker.

Just six games into the Serie A season, one report labelled Origi as “the worst signing of the season,” with a series of minor injuries also thwarting his start to life in Italy.

“There is no doubt who the worst signing of the season has been in Serie A: Divock Origi. The Belgian left Liverpool hoping to finally nail down a starting spot at a top club, but his time at AC Milan has so far been a disaster.”

Alvise Cagnazzo for the Daily Mail in September

He scored his first goal for his new club in a 4-1 victory over Monza in October, but hasn’t scored again since, and was not included in Belgium’s squad for the World Cup.

Liverpool made over £15 million from the sale of Minamino to Ligue 1 side Monaco, and having played the same amount of games as Origi for his new club, he too has only managed one goal for his new club to date.

The Japan international has been used in a variety of roles across Monaco’s attack, but has struggled to nail down a starting spot, with Philippe Clement’s side sixth in the league table going into the World Cup.

Minamino is competing with the likes of Aleksandr Golovin, Breel Embolo and Wissam Ben Yedder for a place in the attack, with sporting director Paul Mitchell admitting the ex-Red Bull Salzburg forward hasn’t exactly hit the ground running.

“Takumi Minamino is the signing that has had the most difficulty integrating for the time being. We have to be patient. I hope that his goal against Reims will lead to many more.”

He will be hoping a good World Cup will help his chances of hitting top form at club level in the second half of the season.

Williams was Liverpool’s second most-expensive outgoing from the summer window, with newly-promoted Nottingham Forest spending £17 million to secure his services.

Manager Steve Cooper, who knew of Williams from his time coaching at Liverpool’s academy, said the Wales international was one of his key recruits amid the 22 signings they made upon their return to the Premier League.

He was deployed as a right-wing-back in the early weeks of the season, before Cooper made the decision to revert to a back four, a switch that has led to improved performances and results.

With Serge Aurier back to full fitness, Williams has been in and out of the side in recent weeks, and is yet to register any attacking returns for his new club. He started in Forest’s 1-0 win over Liverpool in October.

Supporters have been largely encouraged by Williams’ performances, with some suggesting he has benefited from the recent change of system.

“He is coming through a negative spell with some positive performances and that will help him mentally. I think there has been some good coaching involved. You can see, clearly, that he has benefited from curtailing his enthusiasm to get forward all the time.”

Former Forest full-back Brian Laws to the Athletic in October

Williams is expected to be a starter for Wales as they embark on their first World Cup since 1958.

Having never played a competitive match for Liverpool since joining in a bizarre move from Preston at the start of 2021, the Reds’ managed to bank £4 million for Davies when Rangers came calling.

The centre-back spent last season on loan in the Championship with Sheffield United, a mixed spell which saw him struggle to cement a spot in their starting XI.

Injuries have disrupted much of Davies’ time at his new club this season, with Giovanni van Bronckhorst forced to manage his workload in recent weeks.

He started both games against Liverpool in the Champions League, and while the jury is still very much out, some have been underwhelmed by the impact he has made at Ibrox.

“Davies has been okay. He’s not really been a stand-out for me. Rangers paid a few million for him so when you pay that kind of money, you expect them to come in and be very good – especially domestically. No disrespect but when you look at Livingston and St Johnstone – teams like that – you’re expecting the guy to cruise through those games and he hasn’t, to be honest.”

With Rangers crashing out of the Champions League without registering a point, Davies’ main aim for the rest of the season will be to help his club compete with Celtic for the SPFL title, but that seems unlikely given the nine-point gap between the sides before the World Cup.

Once proclaimed as one of the most gifted players to emerge from Liverpool’s academy, things ultimately didn’t work out for Woodburn at Anfield, with supporters pleased to see him get a good move when his contract expired last summer.

Now 23, he has featured in all but three of Preston’s games this season, with Ryan Lowe’s side ninth in the Championship heading into the mid-season break.

Still Liverpool’s youngest-ever goalscorer, Woodburn has only made four starts in the Championship so far this term, with Lowe often using him as an impact player off the bench in a variety of different attacking positions.

Ojo was among the seven players released by Liverpool this summer, departing the club after over a decade, having failed to kick on after promising signs.

A month after his exit, Cardiff made the decision to sign the winger on a free transfer, a club where he enjoyed a successful loan spell in 2020/21.

With 22 appearances to his name, 13 of those starts in the Championship, Ojo has scored one goal, with manager Steve Morison deploying him on both flanks and in the No. 10 position this season.

Just one point above the bottom three, Ojo and Cardiff have work to do in the second half of the season if they’re to avoid a relegation battle.

With his Liverpool contract expiring last summer, Loris Karius had not yet found a new club when the transfer window slammed shut at the start of September.

Days later, though, he found himself signing a short-term deal with Premier League high-flyers Newcastle, who were in need of back-up to Nick Pope, after second-choice ‘keeper Karl Darlow sustained an injury.

Karius is yet to play a game for his new club, and with Darlow now fit again, is effectively their third-choice goalkeeper.

Ben Foster, the ex-Watford goalkeeper, recently revealed that Newcastle had attempted to lure him out of retirement before they made their move for Karius.

Choosing where I wanted to play my football in the next stage of my career was an important decision and there’s no better place for me than @QPR , a great club that I am proud to be a part of. Really excited to be here ? pic.twitter.com/BzgesXrnFv

A number of players who made their way through the Liverpool academy ranks left the club upon the expiration of their contracts last summer.

The most notable of those was Elijah Dixon-Bonner, who was without a club until October, until signing a contract with Michael Beale’s QPR after a successful trial period. He is yet to make an appearance for the Championship side.

Last season’s under-21s captain Tom Clayton was another to depart, joining League Two Swindon Town in July. The centre-back has made 14 league starts so far, with his side currently sixth in the table.

Luis Longstaff joined Scottish League One side Cove Rangers, where he’s made 13 goalless appearances, while right-back Sean Wilson is now with Northern Premier League Division One side Skelmersdale United.