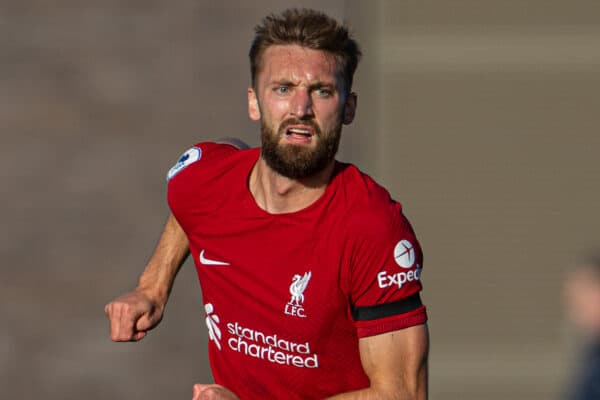 Nat Phillips built up game time ahead of the Carabao Cup clash with Derby – and got an assist along with it – as the Liverpool under-21s beat Fulham 3-1.

Having been denied a summer move away despite interest from a number of clubs, Phillips has kept his head down but found minutes on the pitch hard to come by so far this season.

His only appearance for the first team came with a start against Crystal Palace in the Premier League, with Sunday bringing a second outing for the U21s instead.

It came three days before a Carabao Cup third-round meeting with Derby that he is likely to start, with 45 minutes in a high-profile tie against Fulham easing him back into action.

There were three returns from injury for Barry Lewtas‘ side, too, including Tom Hill’s first game since suffering an injury during pre-season, but the manager was still required to start Melkamu Frauendorf up front.

That paid off again, though, as the young German netted in the fifth minute, following up an effort in the 3-0 victory at West Ham the previous week.

Jarell Quansah then doubled the tally not long after, with Phillips credited with the assist for the defender’s close-range finish.

Olly Sanderson grabbed one back for Fulham after the break, but Liverpool regained their two-goal lead through the fit-again Layton Stewart, assisted by another player back from injury, James Norris.

The young Reds were then able to control the game and earn the three points that lifts them above Fulham and into second in the league, a point behind leaders Arsenal.

Phillips was not the only player whose minutes were limited due to involvement against Derby, with Bobby Clark poised for a start at Anfield after being withdrawn at half-time, too.