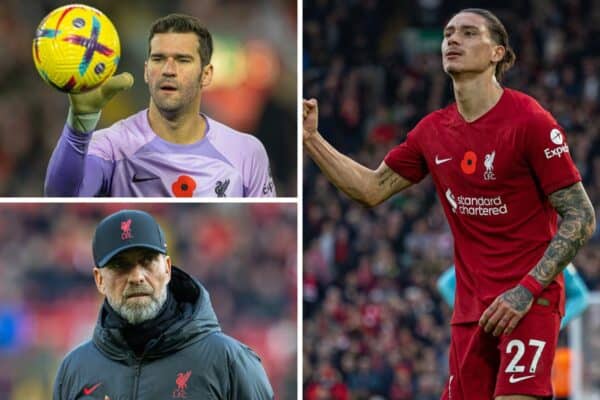 Liverpool were impressive in the 3-1 victory at home to Southampton, but will they end up securing a top-four finish?

Darwin Nunez‘s double inspired Liverpool to victory, while Roberto Firmino bounced back from his World Cup disappointment by bagging the opener.

It’s now six weeks without a game for the Reds, with seven players off to Qatar and the rest of the squad enjoying some downtime.

Here, This Is Anfield’s Henry Jackson (@HenryJackson87) is joined by Dave Hendrick (@MrTwoFooted) to discuss Liverpool’s win and assess their top four chances.

DAVE: There was a lot of good, I thought, especially in the first half. Movement and purpose in attack, aggression in how we went about winning the ball back.

Darwin causing chaos, Harvey involved in a lot of our best work and Thiago putting on a masterclass in how to pass the football.

It was good to score the early goal, considering we knew we were going to concede an early one, as that is what we do!

It gave us a decent platform to build from and meant that their goal wasn’t a hammer blow, like it has tended to be in previous games.

I thought we had some very good individual performances today which was nice – Alisson, Robbo, Fabinho, Thiago, Harvey, Bobby and Darwin all gave really good accounts of themselves.

Hopefully, we’ve just set ourselves up for our lads to bounce out of the World Cup break and attack the second part of the season.

HENRY: I agree with all of this – it wasn’t a perfect performance, but the positives easily outweighed the negatives.

With each passing week, Nunez looks more and more of a monster and I thought he was brilliant in all facets of his game.

Someone described him as the equivalent of letting a rogue horse loose in a shop and that sums him to perfection. He is chaos.

As a side note, he’s my cheeky tip to be top goalscorer at the World Cup, so don’t say I didn’t warn you!

There were other good performers, too, from Thiago to Elliott, but I want to pay special praise to Robbo, who I think has been great recently.

While other defenders around him have struggled, he has remained at a high level and is Europe’s most complete full-back, in my opinion.

Simply getting the win was massive as well and I was pleased with the manner in which Liverpool responded to the equaliser. There was no panic.

DAVE: He’s the best we’ve ever had, isn’t he? Just a truly special goalkeeper.

I think he’s the best in the world right now and arguably one of the best the game has ever had.

There’s no weakness in his game and there’s not even an area that he is simply good in. He’s great at everything.

Shot-stopping, one-on-ones, distribution, claiming crosses, organising the back four. Great in each and every area.

It would be nice if we weren’t asking him to do quite so much this season – he seems to make at least one ridiculous save in almost every game, but the knowledge of having him there is one of the few things that has kept us all positive that this season can still be turned around.

Not sure what to make of the freshly shaved look he went with today, but as long as the goalkeeping skills remain on point, it’s all good.

When Alisson made that save to deny Adams in the second half I made some weird squeaking noise, such was its brilliance!

He is an unbelievable goalkeeper – by far the best I’ve seen in a Liverpool shirt and genuinely one of the best of all time.

Nostalgia makes people wax lyrical about players of the past, and while someone like Peter Schmeichel was clearly incredible, I don’t believe he was any better than Ali.

Barring the odd mad moment with the ball at his feet, Ali is the perfect ‘keeper – he is huge, mobile, reads the game brilliantly, organises the defence and is so consistent.

The main part of his genius is how easy he makes everything look and I wouldn’t swap him for anyone in the world.

The fact that he is enviously handsome and seemingly the nicest man on the planet really does make him the all-round package!

And will Liverpool get top four?

DAVE: It’s been such a bizarre season so far and it’s hard to really understand why.

The lack of recruitment in the midfield is obviously a massive factor but that doesn’t explain Trent and Virgil playing like it’s a legends seven-a-side and Fabinho looking like he aged six years across a span of six months.

Clearly, things went wrong in pre-season and we’ve never really got them right since, but at least we have managed to turn things around and are finally putting some wins together.

The win against Spurs felt big and so did this one. It’s odd that a home win against a team in the bottom three could feel big but this one did.

It felt like a nice extra bit of momentum heading into the break. A bit of added positivity, especially in these uncertain times with the club being up for sale.

I think top four is there to be taken, it’s just a shame we’re not six points better off from those Forest and Leeds games or I’d be eyeing a run at the title.

Man City will likely ease their way to it but they’re fragile, Chelsea are a mess, Spurs keeping digging holes that they have to climb out of, United simply aren’t good and Arsenal and the Toon are overperforming massively and will likely hate this upcoming break as it kills their momentum.

Both will go through bad runs this season and fall back to earth.

We need reinforcements in January. We need two players in. At least one in midfield, and the other someone who can play in wide areas, or just two in midfield.

Get those players in the door early in January – there’s no excuse not to given the World Cup break – and we can definitely make top four this season.

HENRY: It’s going to be a mad, nervy, unpredictable battle, isn’t it?

I think we can assume that City will be champions after winning about 84 games in a row after Christmas, and Arsenal are too far ahead to be caught by anyone else.

Then the other two places really are there for the taking, and my gut feeling is that Liverpool will take one of them.

It has been a largely horrible season to date, but there are clear signs of improvement, and I think the World Cup break will ultimately be beneficial.

Once the likes of Luis Diaz and Diogo Jota are back, and hopefully some midfielders, I think the Reds will find more consistency and go on a winning run.

One good spell over six or seven games could be all you need to get into the top four this season, such is the unpredictable nature of those in the battle.

Let’s face it, fourth is the absolute bear minimum for Liverpool – not qualifying for the Champions League would be a disaster.

Before the Spurs game, I had lost all hope, but I am feeling much more positive now.