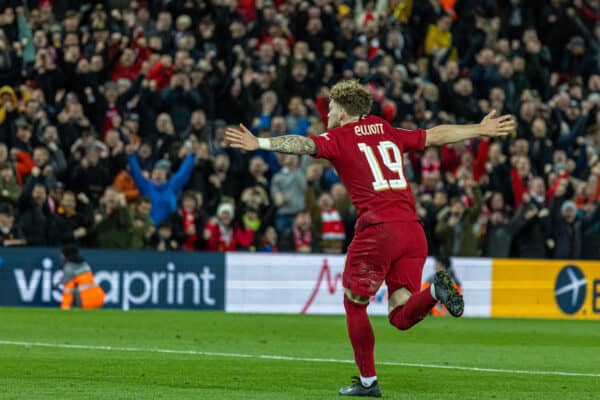 Caoimhin Kelleher was, again, the hero for Liverpool in the Carabao Cup after making three penalty saves as the Reds beat Derby 3-2 in the shootout, after a goalless 90 minutes.

“This competition gives moments for talents” – Pep Lijnders said on the eve of the match.

It has before and it was again the case against Derby, with five Reds making their full debut – four of whom were teenagers – with a further five academy players on the bench.

And that included 16-year-old Ben Doak, who came on to make his debut and showed he has no qualms over taking the game on.

But it was Calvin Ramsay, Stefan Bajcetic, Melkamu Frauendorf, Bobby Clark and Layton Stewart named in the XI for the first time, a moment they won’t forget anytime soon!

What we saw was a mixed bag, as to be expected, with Bajcetic catching the eye with his composure and awareness – his previous role as a centre-back helping no end – Clark making intelligent runs and Frauendorf creating space for himself.

Life was a little harder for Stewart, with balls from midfield not readily coming his way and his golden chance flying into the stands – life can certainly be hard for a young striker who isn’t yet a regular feature in first-team training.

More on Ramsay below, but the six defined what this competition has been about for Liverpool under Jurgen Klopp, irrespective of the highs and lows.

Ramsay shows what he’s about

On the day it was announced he had received his first senior call-up to the Scotland squad, Ramsay’s maiden start in the senior side – albeit full of youngsters – was certainly a solid one.

Confident, as seen by his first-half attempt to make the most of the ‘keeper being off his line, alert to danger and with plenty of energy, the 19-year-old showed signs we all wanted to see.

He was neat and tidy in close settings, slotting next to Nat Phillips on the right side of defence, his quality of balls into the box, though, were hit-and-miss on occasion.

It’s been a long journey to get to this moment for the Scot after months on the sidelines with injury, but his return to fitness and positive showing holds plenty of promise in the bid to make sure Trent Alexander-Arnold has a suitable deputy.

The Reds have seen the benefits of having Kostas Tsimikas rotate with Andy Robertson, as he did here, and the same is needed on the opposite flank, with Alexander-Arnold having already played the fifth-most minutes of any player so far (1,426).

The seniors, did we expect more?

This one is two-fold.

Firstly, it came as somewhat of a surprise to not see Jordan Henderson or Curtis Jones involved in the contest after only late appearances at Tottenham, even if this competition is youth-centred.

One can only hope there are no fitness issues there.

Secondly, you were left wanting more from namely Carvalho, Oxlade-Chamberlain and Tsimikas – there are mitigating circumstances, but they are the senior players who can turn the game and pull the youngsters with them.

We saw it last season when Liverpool had Divock Origi and Takumi Minamino as their go-to men for the goals, allowing younger players to fill in behind them, it’s not the same this go around.

Carvalho was lost once more on the left wing and you wonder where he best fits in and when his ‘aha’ moment will arrive, while Elliott and Firmino had fleeting moments in their 24 minutes before penalties, and Nunez was rarely seen.

Injuries have dictated otherwise for the Reds, but this is when you want to be seeing more from those aforementioned players, showing the disparity in quality with their League One opposition and acting as the driving force for their younger counterparts.

The hero in the shootout…again

You can excuse Caoimhin Kelleher from the above, the man comes alive when it is time for penalty shootouts – even if it was his first senior minutes of the season.

Call it his speciality – that’s now four penalty shootout wins, more than any Liverpool goalkeeper in the club’s history, as per Opta‘s Michael Reid. He’s only played 18 games.

Even though he was not required to take one this time around, after having little to do throughout the match Kelleher was able to be the match-winner in this competition – again!

Three penalties saved ensured Liverpool’s misses from the spot were not punished and will again start to raise questions over his future – how long will he be content to sit behind Alisson?

At 23, Kelleher would be a key asset to a long list of clubs and they can offer what Liverpool cannot when it comes to his desire to nail down the No. 1 position with Ireland, that being game time.

For now, he has kept the defence of the Carabao Cup crown alive and earned another outing in the fourth round.

With an average age of 21.8, Liverpool’s XI was a far cry from what we see on the regular from Klopp, but it served several purposes – and irrespective of personnel, we had drama!

It was never to be a match that was easy on the eye, and it wasn’t, this team didn’t have any rhythm together but it was job done from the penalty spot and more of that feel-good factor injected throughout the entire club.

It leaves just one match to go before the World Cup break, with Southampton the visitors on Saturday – with three more points needing to be banked to sign off on a high.

For all of Liverpool’s struggles, they will return in December with four plates to spin and hopefully having hit the reset button on their consistency and form.