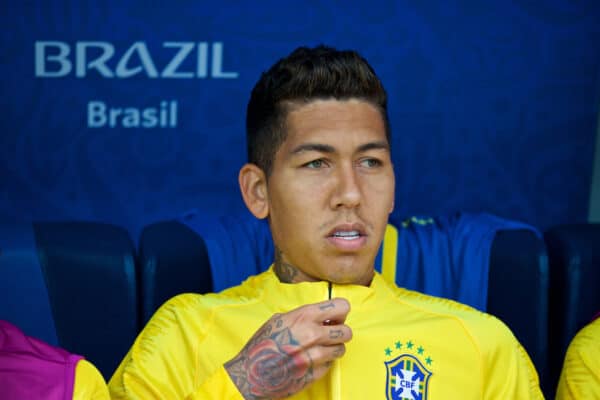 Roberto Firmino has missed out on Brazil’s 26-man World Cup squad, meaning only two of Liverpool’s Brazilian contingent are on the plane to Qatar this month.

There has been plenty of debate and speculation over whether Firmino would make the final cut for Tite’s World Cup squad, with Brazil not short on attacking options.

Liverpool’s No. 9 has been in form for the Reds, scoring eight goals and setting up a further four in 19 appearances so far this season.

He’s played the sixth-most minutes in Jurgen Klopp‘s squad so far (1,276), having returned to fitness after an injury-interrupted 2021/22 season.

But his efforts have not been rewarded on the big stage, meaning Firmino has missed out on being selected for his second World Cup – but Alisson and Fabinho have both secured a place on the plane.

Brazil are the favourites to win the competition and they start their tournament on November 24, with Serbia as their first opponent in Group G.

Brazil’s 26-man squad will convene in Turin, Italy, on November 14, where they will train for five days before leaving for their base in Doha.

In attack, Tite opted for the likes of Gabriel Jesus, Gabriel Martinelli, Neymar, Raphinha, Richarlison and Rodrygo over Firmino.

Alisson will be competing with Man City‘s Ederson and Palmeiras’ Weverton for the No. 1 spot, but the Reds ‘keeper has assumed those duties for some time and will not be easily usurped.

As for Fabinho, he had slowly started to see his minutes for Brazil grow last season but played only 27 minutes when Tite’s side played two games in September – not that Liverpool would have been complaining.

There’s a strong chance the duo will be lifting the World Cup come December, but, for many, their fitness on return will certainly be the priority.