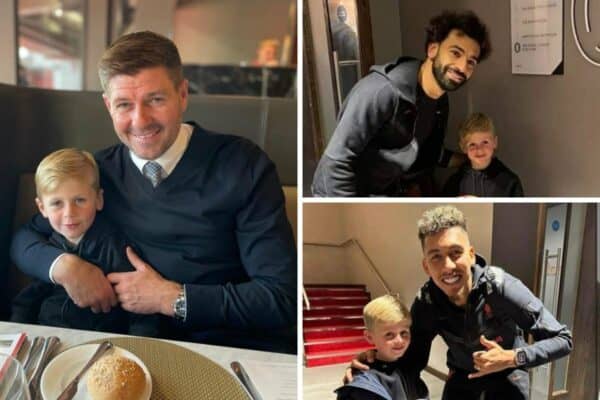 Jurgen Klopp wasn’t the only club legend watching on from the Anfield stands for Liverpool’s victory over Southampton, with Steven Gerrard attending his first match together with son Lio.

Gerrard, of course, was relieved of his duties as Aston Villa manager last month, and took the opportunity of a free weekend to watch the Reds in action on Saturday.

He wasn’t alone, bringing along his son Lio as the pair attended their first Liverpool match together.

Gerrard shared images of Lio with the likes of Mohamed Salah and Roberto Firmino on social media, with Ian Rush also posing for a photo with the pair.

Lio, who was born in 2017 while Gerrard was a coach at the Liverpool academy, has previously been pictured sporting Rangers and Aston Villa shirts while his dad was in charge of both clubs.

But this was a trip that would have felt extra special for Gerrard, having not been able to attend a Liverpool first team game with his son until now.

They certainly picked a good game to go and watch, with the Reds seeing off Southampton 3-1 in their final match before the World Cup break.

Gerrard’s next step in management remains to be seen, having failed to match the high standards he set as Rangers manager while in charge of Villa.

For now, it seems as if the Liverpool legend is rightly enjoying some down time with his family, after what would have been a difficult period for him following his Aston Villa dismissal.

Jurgen Klopp has previously gone on record to say that there will always be a role of some sort available to Gerrard at Liverpool, and who knows whether he will return to the Reds in some capacity in the future.

The first of many Liverpool games for Lio and, who knows, maybe he’ll be running out for the Reds himself one day!