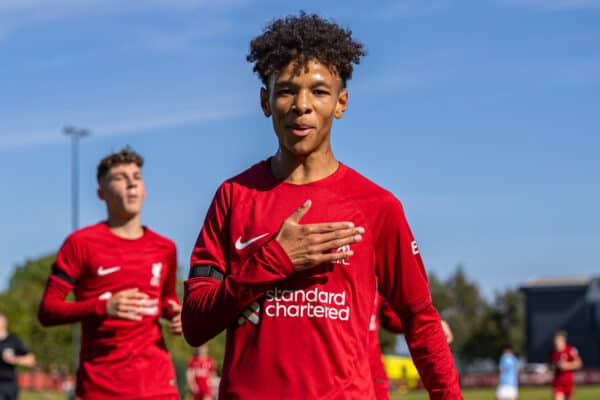 A debut goal for 16-year-old Trent Kone-Doherty helped a young Liverpool under-21s on their way to a 2-0 win over Dinamo Zagreb on Wednesday night.

With nine of his regular starters involved instead with the first team in the Carabao Cup, Barry Lewtas was forced to experiment in the opening game of the Premier League International Cup.

That brought starts for the likes of Tommy Pilling, Ranel Young and Francis Gyimah from the under-18s, along with a debut for Irish winger Kone-Doherty, a summer signing from Derry City.

Up against a promising Dinamo Zagreb side, Liverpool produced a controlled performance on their way to a 2-0 victory.

Lewis Koumas, a prolific goalscorer having shifted to the No. 9 role this season, got the home side off the mark in the third minute, firing home excellently from Young’s cutback.

The young Reds remained the dominant side throughout the first half, with Mateusz Musialowski a real threat in his attacking berth, but they were unable to add to their tally.

That was until the 72nd minute, when Kone-Doherty picked up the ball and slotted in after a turn in the penalty area, scoring in his first outing for the U21s.

It brings the youngster’s tally to 10 goals and three assists in 16 games for the academy so far this campaign, on a night when his fellow new arrival, Ben Doak, stepped up to the senior side.

Hopes are high for Kone-Doherty within the Liverpool backroom, and the 16-year-old passed after big test on his U21s bow.

Next up in the cup is another home tie, this time against Paris Saint-Germain on January 11, with no U21s fixture now until January 8, against Tottenham in the league.