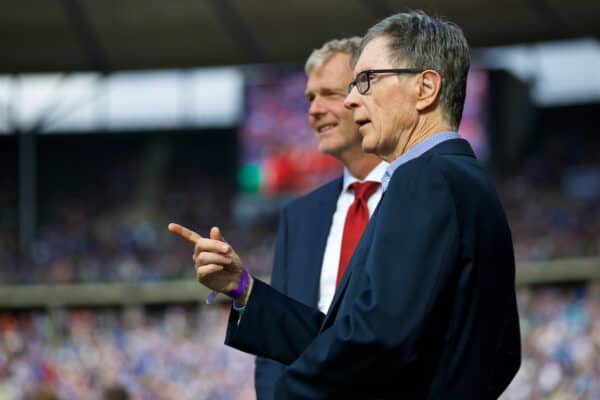 A journalist from the United States has claimed to reveal new information on FSG’s plans to sell Liverpool, including a “genuine suitor” from America.

Fenway Sports Group have steadily shifted their stance in recent weeks as they explore the possibility of selling their majority stake in Liverpool.

The club’s owners are receiving consultation from Goldman Sachs and Morgan Stanley in seeking investment, with the belief being that they are looking for a new buyer.

FSG president Mike Gordon has stepped back from his day-to-day duties within the club – which saw him work closely with Jurgen Klopp – and is instead focused on a sale.

According to CBS journalist Ben Jacobs, writing on Twitter, FSG “would prefer a full sale,” and “those familiar with the process” expect that “may happen sooner rather than later.”

“Sources do stress [the] wheels are very much in motion,” he adds, after explaining that ‘soon’ in this context “still takes a fair amount of time.”

In the short term, it is maintained that “Klopp has been given guarantees, regardless of timescale, that the next two transfer windows won’t be affected by the process.”

Interestingly, Jacobs touts Harris Blitzer Sports & Entertainment (HBSE) as a “genuine suitor,” having seen their attempt to buy Chelsea fall short earlier this year, and that “the sale process is framed towards an American-led investor.”

HSBE were founded by Josh Harris and David S. Blitzer in 2017 and are based in the US, with their assets including NBA franchise the Philadelphia 76ers and NHL team the New Jersey Devils.

They are already investors in Crystal Palace, however Jacobs claims that this “didn’t present any roadblocks during the Chelsea sale tender.”

Involved in their bid to buy Chelsea was Martin Broughton, the former Liverpool chairman who oversaw the sale of the Anfield club from Tom Hicks and George Gillett to FSG in 2010.

While that purchase came at around £300 million, Jacobs claims that “FSG expect Liverpool to sell for close to $1 billion more than Chelsea,” with a valuation standing at around £3.1 billion.

“The expectation, from those familiar with the process, is offers of $3 billion and above will be seriously entertained,” he adds.

“But the growing volume of interest should result in a higher sale price should a chosen bidder progress.”

However, Jacobs adds: “A full sale is by no means certain.

“FSG don’t just want the right price (they are making a huge profit either way), but the right group as well, so a lot will depend on not just the offer but the plan for the club going forward.”

Potential investors from the United Arab Emirates and Bahrain have already denied interest.