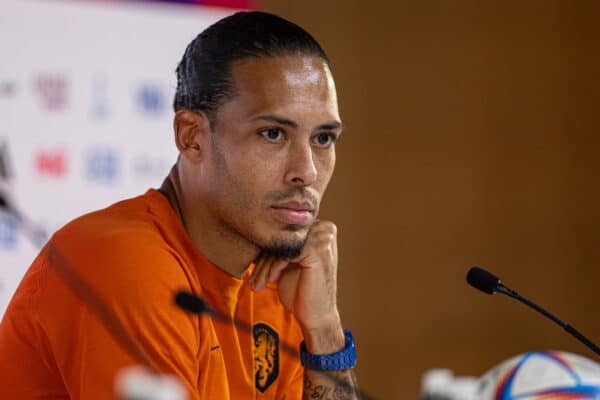 Virgil van Dijk has hit back at claims the Netherlands and other countries have been spineless in the anti-discrimination armband controversy.

The Dutch were one of seven European nations, also including England and Wales, who planned to have their captains wearing the rainbow-coloured ‘OneLove’ armband at the World Cup.

The band is part of a year-long campaign but sent out an especially significant message in Qatar, a country which criminalises same-sex relationships.

However, the seven countries dropped their plans after tournament organisers FIFA threatened them with sporting sanctions including yellow cards for the captains if the bands were worn, instructing teams to wear a FIFA-approved ‘no discrimination’ band instead.

Oranje skipper Van Dijk told Dutch broadcaster NOS: “I play in a position where a yellow card is not useful. I became a football player and I want to play these kind of tournaments.”

“There are people who say we don’t have a backbone, but that’s not how it works,” the Liverpool defender added.

“We just want to play football. I would have loved to play with that band, but not at the expense of a yellow card.”

England skipper Harry Kane spoke of his disappointment at not being able to wear the band during England’s opening victory over Iran on Monday, while his team-mate Jack Grealish said it was “a bit stupid” that Kane had been prevented from doing so.

The Football Association had been prepared to be fined over the band but its position – and that of the other associations – changed when it became apparent sporting sanctions were a realistic possibility.

FIFA has been heavily criticised over the matter.

It only announced its plan for an approved armband on Saturday, and even then, it stated the ‘no discrimination’ part of its campaign would only begin at the quarter-final stage.

Instead on Monday that position shifted. It followed a late U-turn on alcohol sales within stadium perimeters last Friday, and has again raised questions over who ultimately is in charge at this World Cup – FIFA or the Qatari authorities.

Wales supporters alleged rainbow-coloured items were confiscated from them before their match against the United States on Monday night, including Laura McAllister, who last year stood for election to the FIFA Council.

So, despite fine words from @FIFAWorldCup before event @Cymru rainbow Bucket hats confiscated at stadium, mine included. I had a conversation about this with stewards – we have video evidence. This #WorldCup2022 just gets better but we will continue stand up for our values ?

She tweeted on Monday night: “So, despite fine words from @FIFAWorldCup before event @Cymru rainbow bucket hats confiscated at stadium, mine included.

“I had a conversation about this with stewards – we have video evidence. This #WorldCup2022 just gets better but we will continue stand up for our values.”

FIFA and the Supreme Committee, the tournament organisers, have been approached for comment on the allegations that rainbow-coloured items were confiscated.

FIFA is understood to have had assurances from the Qatari authorities before the tournament that supporters would be able to wear rainbow-coloured clothing and carry rainbow-coloured banners and flags.