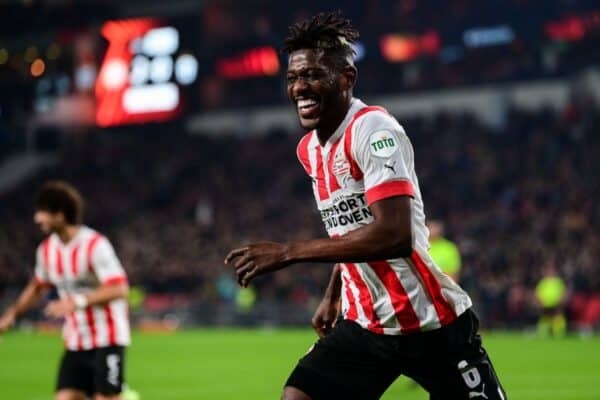 While much of Liverpool’s transfer plans will be focused on the summer, PSV Eindhoven midfielder Ibrahim Sangare may be the perfect fit for January, writes Harry McMullen.

Liverpool’s midfield issues have been well-documented this season.

With the majority of the senior options already visiting the treatment room, Jurgen Klopp has been forced to make frequent changes, and his half-fit, exhausted, teenage and veteran options are struggling to hold the unit together.

Time and again Liverpool’s midfield has looked uncharacteristically overrun, particularly in the defeats to Napoli in the Champions League and Arsenal in the Premier League.

So what’s going wrong? Can one man really make a difference? And what is a ‘between-the-boxes’ midfielder?

While Liverpool’s pressures in the final third have dropped significantly (from a league-high average of 44.8 per 90 last term to just 32.8 per 90 this campaign) and individual mistakes have crept into the defence, the most startling regression has been in midfield.

Players like Fabinho and Jordan Henderson have previously dominated opponents with intelligent, aggressive performances off the ball.

But this year, they’re a shadow of their former selves.

Coupled with the fact that injuries have left them playing with either 36-year-old James Milner or teenagers, it’s meant that dominoes have fallen rapidly as opponents carve Liverpool open with embarrassing ease.

Here’s an example from the recent home defeat to Leeds.

The ball is turned over from a set-piece. Thiago immediately finds himself marking three players by himself and freezes, allowing the first easy pass out.

Harvey Elliott is on the far side looking exclusively at the ball.

Fabinho comes across to press the receiver, Brendan Aaronson, but without the intensity or the assuredness of his best self.

A simple shimmy and Aaronson has bypassed Fabinho with space to attack.

With Virgil van Dijk still tracking back from the initial set-piece, Elliott has joined the defence, but his continued focus on the ball allows Rodrigo to run into a dangerous area unmarked.

Aaronson easily plays the ball through Elliott’s attempt to intercept and Leeds are away.

While Liverpool undoubtedly possess quality in midfield, they largely fit into three categories this season:

As Klopp said when he initially ruled out a new midfield signing: we have quality, we have numbers.

As he now realises, between these three categories he cannot put out a midfield that dominates for 90 minutes week in, week out.

No discussion of Liverpool’s midfield is complete without two topics: the failure to make a significant addition last summer, and the links with Dortmund’s Jude Bellingham next summer.

Bellingham would indeed be the perfect fit for Liverpool, and the club have a history of paying up when the target is right (see: Alisson, Van Dijk, Darwin Nunez).

But it’s almost impossible to imagine a move materialising before the end of the season, and Liverpool’s midfield issues need a solution now.

Who is Ibrahim Sangare?

This brings us to PSV’s Ibrahim Sangare.

The Ivorian has been a data darling since his days with Ligue 1’s Toulouse in 2018, but his recent displays with PSV and his national team at the Africa Cup of Nations have brought him into the mainstream.

The likes of Man United, West Ham and Chelsea were all linked with him in the summer, after he played a key role in PSV’s second successive runner-up finish in the Eredivisie.

PSV finished with the third-fewest goals conceded (42), thanks in no small part to Sangare’s 169 combined tackles and interceptions – the most of any player in the Netherlands that season.

But despite his defensive numbers, Sangare is not a pure holding midfielder in the Fabinho mould.

His ability to resist opposition pressure and dribble forwards with the ball is demonstrated by his 69 percent success rate from 2.53 dribbles per 90, while he created 22 chances for his team-mates in 2021/22.

While his 6’2″ frame and strong defensive numbers allow him to drop deep and support the defence, Sangare is used by both club and country in a more dynamic role, carrying and passing progressively, switching the play and showing up around the box.

This all-round contribution, plus his reputation as a meme amongst data nerds, means there’s no shortage of YouTube compilations if you want to submit him to an eye test.

But why do Liverpool need him?

Perhaps the best statistical depiction of Sangare’s all-round quality, and what he can bring to Liverpool, is how he compares with Gini Wijnaldum from the title-winning 2019/20 season.

Why am I suddenly talking about Gini Wijnaldum?

Wijnaldum’s contribution was often difficult to quantify, as he did not perform like a holding midfielder, a box-to-box midfielder or an attacking midfielder, yet Liverpool’s best results came with him on the pitch.

A more accurate term would be a ‘between-the-boxes’ midfielder.

Wijnaldum scarcely gave the ball away, either with his passing or dribbling, and so his team-mates could always pass to him and he’d always eventually get it to another red shirt.

In transition, Wijnaldum was an elite counter-presser but could also drop in and cover gaps left in behind his full-back.

A between-the-boxes midfielder is essentially a pressure valve: turning it up with aggressive pressing when out of possession, then helping to dominate and exhaust opponents by forcing them to chase the ball.

At their best, Liverpool start games explosively, hunting in packs with short, sharp bursts of aggression, and pursue an early lead.

As the game wears on, they can rest on the ball as needed, turn up the pressure when it suits them and see out games once comfortably in front.

Without the pressure valve of that elite recoverer and press-resister, the team can find themselves chasing a goal late in games or running out of steam.

The recent 2-1 win over Tottenham exemplified this when Liverpool were able to field three very good midfield players, play like the Liverpool of old and take a 2-0 lead – but then lost control entirely in the second half and rode their luck to a massive three points.

Perhaps by adding just one between-the-boxes midfielder, the entire complexion of the team can change.

So how does he compare?

This was evident last season when the mantle of the ‘between-the-boxes’ midfielder was passed on to Naby Keita.

While more creative players like Thiago and Elliott were given more licence to take risks with the ball, he was tasked with helping Liverpool control games.

He did this effectively across the Premier League and Champions League last season, and Liverpool were a hair’s breadth from winning both competitions.

In his absence, however, Liverpool have struggled for the same level of control this term.

While Keita still has a part to play when he returns from his latest injury, his frequent absences and expiring contract mean he is not the solution in the short or long term.

When placed alongside Wijnaldum and Keita, Sangare profiles extremely well for a between-the-boxes midfielder.

While there is some adjustment to be made for the gap in quality between the Premier League and the Eredivisie, his per 90 numbers from 2021/22 and the current season so far are encouraging – particularly his ball recoveries, take-on success and ground duel success.

He also has the added advantage of height, standing at 6’2″ and winning the majority of his aerial duels.

The numbers suggest he can win the ball, carry it and pass it reliably.

While these sound like straightforward qualities, few of Liverpool’s current options have displayed all three consistently this season.

His injury record so far is outstanding, his qualities align with a much-needed gap in the squad and his price tag is unlikely to be prohibitive.

He ticks every box, and he ticks between the boxes.

There are likely to be at least three midfielders leaving Liverpool this summer, while a number of talented young players are getting valuable experience and the tantalising prospect of Bellingham is on the horizon.

It would be understandable if the club is looking to make do and mend for the rest of the campaign.

But there is a glaring round hole costing us points right now, and a perfectly round peg within reach.

* This is a guest article for This Is Anfield by Harry McMullen. Follow Harry on Twitter, @mcmulhar.