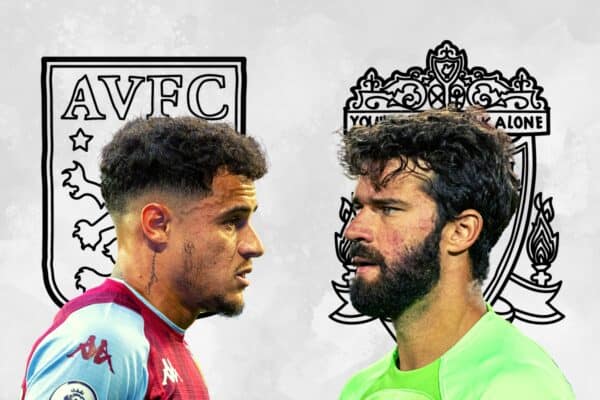 Victory is essential for Liverpool in their return to Premier League action on Boxing Day, but Aston Villa are set to provide a stern test for them.

The Reds were knocked out of the League Cup at the expense of Man City on Thursday but, in truth, finding rhythm and fitness felt more important than the result.

Up next is a festive treat, as Jurgen Klopp‘s side head to Villa Park on Boxing Day evening, looking to continue wrestling their way back into the top-four picture.

Here’s all you need to know ahead of the game.

1. The Premier League is finally back!

It feels like a lifetime ago that Liverpool saw off Southampton 3-1 at Anfield before the World Cup got in the way of the domestic season.

Now, the Reds are finally back in league action after six weeks away, and it feels like a reset for them.

The first half of the campaign was hugely disappointing with so many issues holding them back, but now is the time to find a new gear – although that doesn’t look straightforward.

City and Arsenal look nailed on to be the top two, but there are five other teams competing for the final two Champions League spots, so any dropped points will feel big from this point on.

Thursday’s clash at the Etihad was a reminder of how much better domestic football is to the international game, albeit after an exciting World Cup, and the trip to Villa has every chance of being entertaining, too.

Liverpool already have a number of key injury problems, most notably long-term absentees Luis Diaz and Diogo Jota, and James Milner limped out of the City game with a hamstring issue.

It has further added to Klopp’s current woes, with Curtis Jones and Roberto Firmino both missing, too.

Ibrahima Konate still isn’t back after his involvement in the World Cup final, allowing him time to recharge the batteries.

On the plus side, Alisson, Trent Alexander-Arnold and Virgil van Dijk are expected to return to the starting lineup against Villa, while Fabinho and Jordan Henderson are also likely to start.

Steven Gerrard may be one of the leading players of his generation, but that doesn’t necessarily mean he will be a great manager.

Granted, the Liverpool legend did well at Rangers, but his time at Villa was disappointing and he was sacked in October.

In his place is Unai Emery, who is a proven manager at the top level, having won an incredible four Europa League titles with Sevilla and Villarreal.

The Spaniard didn’t pull up trees at Arsenal but he is someone who is tactically astute and who will make Villa tough to beat.

With all due respect to a legendary figure in Gerrard, Klopp would likely prefer to be facing a Villans team managed by him rather than Emery on Boxing Day.

4. Villa without their World Cup winner

Lionel Messi’s story may have understandably dominated the World Cup, cementing his all-time great status, but Emiliano Martinez’s impact was just as great for Argentina.

The 30-year-old is the epitome of the eccentric stereotype for a goalkeeper, with his penalty shootout antics proving vital in the wins over the Netherlands and France.

Thankfully for Liverpool, Martinez is unavailable for the Boxing Day action, no doubt partly due to the alcohol still coursing through his veins after the post-World Cup celebrations!

That means Robin Olsen will deputise for the Argentine against the Reds, enhancing the visitors’ hopes of victory in the process.

Meanwhile, defender Diego Carlos is a long-term absentee, and impressive youngster Jacob Ramsey is also out, but former Liverpool man Philippe Coutinho is in the squad.

Boxing Day football is a treat for any fan, but defeat for your team can quickly ruin a great day in the footballing calendar.

Fortunately, Liverpool have fared superbly on Boxing Day with Klopp at the helm, having won all four of their matches, without conceding a goal.

They saw off soon-to-be Premier League champions Leicester at Anfield back in 2015, thanks to a Christian Benteke goal, before a 5-0 home drubbing of Swansea two years later.

In 2018, Newcastle were swatted aside 4-0 on Merseyside, before an iconic win by the same scoreline away to Leicester in 2019.

That was possibly the best performance of the entire title-winning season, with Liverpool bordering on perfect, having only just returned from Club World Cup glory.

More of the same this time around would be ideal, in what is the Reds’ first Boxing Day outing for three years.

Naby Keita‘s injury record at Liverpool has been much-publicised, with only 72 starts coming his way in four-and-a-half years.

The Guinean is now back fit, however, and he will be looking to earn his first minutes in the league this season at Villa.

Another cameo from the substitutes’ bench feels likely, as was the case at City.

It’s certainly a make-or-break point in Keita’s career, with his unavailability a constant issue and his contract expiring next summer.

Liverpool’s midfield clearly needs a major revamp, and if the 27-year-old can’t stay fit between now and May, and perform well, there will surely be question marks over him being one of those being moved on.

The talent and tactical nous are there, but fitness and consistency have forever held him back.

Speaking to the media on Friday, Klopp refused to rule out January signings, following Jamie Carragher’s claim that they could spend £250million in the near future::

“It’s Christmas, yes! I don’t know about the amount, but I’m not against investment.

“We will see what the future brings, but I am convinced it will be good.

“From a sports side, we are always prepared. We always work with what we’ve got and that won’t change.”

Surely a midfield addition will come in next month, given Liverpool’s struggles in the middle of the park this season?

Liverpool may have lost at City on Thursday, but Mohamed Salah was once again on the scoresheet as his remarkable record continues.

The Egyptian is working his way up the list of the Reds’ greatest players of all time and one statistic sums up his genius.

Salah’s goal at the Etihad means he is now only one behind Sir Kenny Dalglish, with his overall tally at 171.

What is most incredible, however, is that he has achieved that number in 239 games fewer than arguably the most legendary Liverpool figure in history.

Granted, Dalglish’s game was about more than just goals, but it goes to show the phenomenal rate at which Salah finds the net.

Paul Tierney has been confirmed as the referee for Sunday’s match, and as is the case with most Premier League officials, there will be some who are irked by that news.

The 41-year-old sent-off Darwin Nunez for a headbutt in the 1-1 draw with Crystal Palace back in August, although it is hard to argue with that decision.

Tierney also took charge of the 1-0 defeat at Nottingham Forest, so Liverpool haven’t fared too well with him in charge this season.

He has refereed 12 league games in 2022/23 to date, handing out 46 yellow cards and also awarding two penalties.

Aston Villa vs. Liverpool is live on Amazon Prime, as are all Boxing Day games.

If you are unable to watch the game, TIA’s matchday live blog is the best place to keep up with the action, with Sam Millne giving you nice, biased updates from 4.45pm.