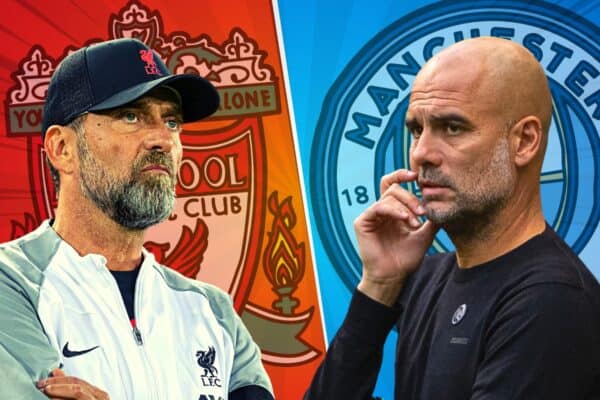 10 key things to know ahead of Man City vs. Liverpool

The wait is finally over, Liverpool are back in competitive action after 40 days and their return takes them to Man City as their defence of the Carabao Cup continues.

It’s been a long wait but Jurgen Klopp‘s side are finally back and we return with domestic cup action against Pep Guardiola’s Man City.

Here are 10 key things you need to know ahead of kickoff.

If the match ends in a draw after 90 minutes there will be no extra time and the game will be decided with a penalty shootout, as was the case for Liverpool in the previous round.

It is only in the semi-final and final that extra time will be played if required.

Caoimhin Kelleher seems to attract shootouts in this competition though, with five of his eight appearances ending in that manner, and, thankfully, he’s won four of the five.

Pep Guardiola wasted little time in saying he had only “four or five (senior) players” for this match at the end of last week thanks to the World Cup – but that’s recently been boosted.

He had Kevin de Bruyne, Erling Haaland, Ilkay Gundogan and Riyad Mahrez for a friendly while Nathan Ake and Rodri have recently returned to training to put them in contention to feature.

Sergio Gomez and Cole Palmer, regulars in City’s squad, are also available to Guardiola, who can line up his side with experience and youth.

After a number of unsavoury flashpoints thanks to a minority group of fans at both clubs, both Liverpool and Man City CEOs have written a joint letter to fans to “help eliminate unacceptable behaviour.”

They ask for full support in tackling any “behaviours and actions that have no place in our game,” with those found responsible for any “unacceptable behaviour” to be issued bans.

“If we all stand together to report the behaviours and actions that cause harm – including inappropriate gestures, chanting, throwing of objects, as well as any and all forms of discrimination – then we can all concentrate on supporting our teams,” a section of the letter read.

4. How is the squad shaping up?

Liverpool welcomed back Jordan Henderson, Trent Alexander-Arnold, Alisson and Fabinho back into the fold earlier this week after a short break following their World Cup exploits.

They could well feature but the expectation is none will have a prominent role having only just returned to team training at the start of the week.

Virgil van Dijk has been given an extended break while Luis Diaz, Diogo Jota and Arthur continue their rehab from respective long-term injuries.

Curtis Jones, meanwhile, is one week away from his return to team training and 18-year-old Kaide Gordon is making positive strides in his recovery.

The rest of the squad is in contention for Thursday, including a number of youngsters.

This is the third game between the two teams this season and the fifth match in the calendar year.

The Reds have won both meetings this season, first in the Community Shield and then a 1-0 win at Anfield in the league.

Across 2022 so far, Liverpool have won three while the other – the league match back in April – ended in a draw, making it clear who is out in front ahead of the fifth meeting of the year.

Klopp’s XI for the occasion may not look too dissimilar to the side that started against AC Milan in the final friendly in Dubai, only with Darwin Nunez taking over from Alex Oxlade-Chamberlain in attack.

While Alexander-Arnold only played 33 minutes at the World Cup, he’ll need time to settle back in and with Calvin Ramsay missing a few sessions of late, James Milner could be retained at right-back – it played out OK last time!

A start for Stefan Bajcetic in midfield is likely, with Harvey Elliott and Thiago on either side.

Despite this being the first pre-match press conference since mid-November, Liverpool stuck to their approach of Pepijn Lijnders taking on media duties.

And he had plenty to say – especially about the club’s exciting young talent:

“Yesterday we trained – the session was insane, it was really cool – and I walked off the pitch with Jurgen.

“He just stands next to me and whispers ‘wow, Stefan and Bobby Clark – they play so mature! They play like they are 25!’.

“And I say immediately, ‘and Ben Doak‘. Can you imagine if he was a signing? If he would do what he’s doing in the session?

“You all see he’s very quick, but if you are very quick and technical, that makes a really dangerous player.

“We are just really happy with three young ‘signings’.

“Then I have to pay a compliment to [head of senior academy recruitment] Matt Newbury, because he is our academy scout and he brings these players in.”

Mohamed Salah could become the first Liverpool player ever to score against Man City in three different competitions in the same season.

He, of course, scored in the Community Shield triumph in July before striking the only goal of the game during City’s visit to Anfield in October.

The No. 11 has nine goals in 16 appearances against City so far as a Red – he’s set to start, is he set to score another? Let’s hope so!

9. Coote with the whistle

David Coote is the referee on Thursday evening, it is only his fourth game overseeing Liverpool – but he’s best known for his unbelievable VAR oversight when Virgil van Dijk was injured at Everton.

He has already reffed a City game this season, their 4-0 win over Bournemouth back in August.

There is no VAR official as the technology is not in use until the semi-final stage.

Man City vs. Liverpool is live on Sky Sports Main Event and Sky Sports Football in the UK – which is available to live stream here.

Coverage starts at 7pm (GMT) before the 8pm kick-off.

This Is Anfield’s live blog will also be in full swing from 7.15pm, with Sam Millne to keep you entertained and informed with some unapologetically biased views.