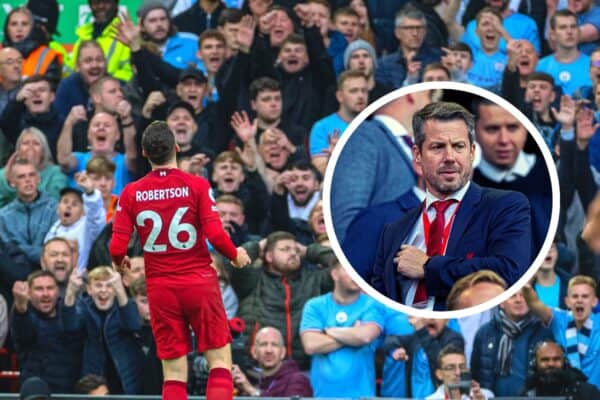 Ahead of Liverpool’s Carabao Cup meeting with Man City on Thursday, both club’s CEOs have written to fans to “help eliminate unacceptable behaviour” and “create the right environment for our matches”.

Since 2018, Liverpool and Man City have met a total of 15 times in a competitive setting and in that time that have been a number of unsavoury flashpoints.

In October, the lower Anfield Road End concourse was vandalised with vile graffiti relating to the Hillsborough tragedy, while chants of the same nature also emanated from the City end.

At Wembley, in April, the minute’s silence to mark the 33rd anniversary of Hillsborough had to be cut short after it was disrupted by City supporters ahead of the FA Cup semi-final.

Back in 2018, objects were thrown at City’s bus as they arrived at Anfield – a culmination of events which has seen Liverpool and City officials meet ahead of Thursday’s game.

Fan groups met last month to make a commitment to work together to improve fan behaviour and now Liverpool’s CEO Billy Hogan and City’s CEO Ferran Soriano have penned a joint letter to fans to ask for full support in tackling the behaviour from a minority group of fans.

The letter, sent to fans via email, reads:

We write to you today on behalf of both Manchester City FC and Liverpool FC, ahead of our Carabao Cup match at the Etihad Stadium later this week.

As with any meeting between our clubs, it promises to be a fantastic spectacle of football and we are sure that you are all counting down to kick-off with much anticipation following the break in domestic football for the World Cup.

The passion and enthusiasm that we see from our fans when we play each other – at the Etihad Stadium or Anfield – is part of what makes matches between our clubs so special, and we know you are committed to creating a stadium environment where everyone is welcomed, accepted and has a fantastic matchday experience.

Regrettably, based on recent meetings between our clubs, we also know that a minority of fans are responsible for behaviours and actions that have no place in our game.

We are therefore writing to ask for your full support in tackling these behaviours and to ensure that both of our Clubs’ good names are preserved. You can help us by reporting any incidents via the options at the bottom of this email so they can be investigated.

We appreciate that some fans may not be aware of the impact of their behaviours on other fans, both inside and outside the stadium, and we will continue to work with our fans on this education.

It is however important for everyone to be aware that we are fully committed to dealing with unacceptable behaviours and will take action by issuing bans to those found to be responsible.

We have engaged the Chairs from both our respective fan groups in our discussions and have their full backing to help create the right environment for our matches.

If we all stand together to report the behaviours and actions that cause harm – including inappropriate gestures, chanting, throwing of objects, as well as any and all forms of discrimination – then we can all concentrate on supporting our teams.
Thank you for taking the time to read this email, and for your commitment to help eliminate unacceptable behaviours in football.

We hope you enjoy the match.

Fans can report any incidents via the Kick-It-Out app or by visiting Liverpool’s report online abuse page here.

Liverpool meet Man City in the fourth round of the Carabao Cup at the Etihad on Thursday evening (8pm GMT), the third clash between the two teams this season.