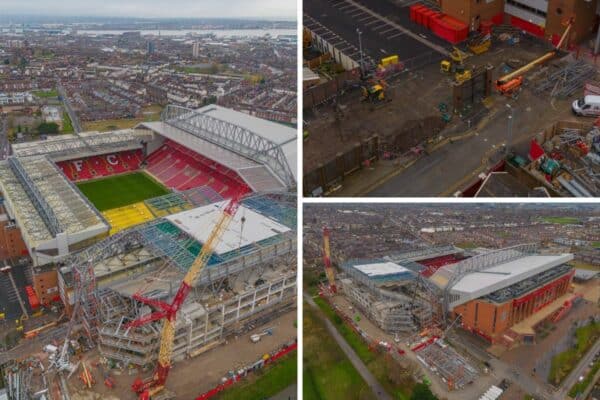 Though plans to remove the existing roof from the Anfield Road End during the World Cup have been postponed, expansion work is progressing well.

Due to the adverse weather conditions on Merseyside through the early months of the winter, a decision was made to pause plans to remove the roof from the Anfield Road stand and that will now be carried out immediately after the final home game of the season.

Now, construction has continued throughout a long break for the World Cup, which has included an update to the area around the Shankly Gates.

The Shankly Gates were first unveiled in 1982, the year after the legendary Bill Shankly passed away, and were moved further along Anfield Road as part of the Main Stand redevelopment in 2016.

The area around it now will become part of the newly pedestrianised part, so the walls attached to the gates have been demolished in the latest update in the stadium’s expansion.

Work on the Anfield Road End redevelopment, which will add another 7,000 new seats to the stand, is on course for completion by the summer.

During the World Cup, the structure has continued to take shape, with the scaffolding removed and the full size and shape now really complete.

The framework is now in place to connect the new Anfield Road stand to the Sir Kenny Dalglish Stand and the Main Stand, with the redevelopment involving an entirely new stand being built around the existing structure.

Upon completion, Anfield’s capacity will be 61,015, with the Anfield Road stand holding 15,967 spectators.

The expansion is believed to come at a cost of around £80 million, with no disruption to normal matchday activity, which will resume on December 30.