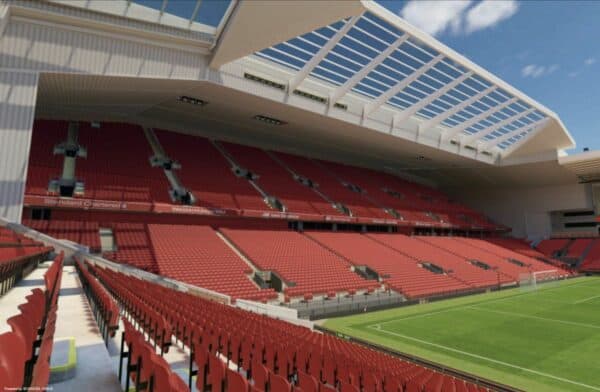 The Anfield Road End expansion is less than a year away from completion and these new rendered images show exactly how it’s going to look.

Work on the new stand began last September, and 13 months later progress is on track to add a further 7,000 seats for the 2023/24 season.

The Anfield Road End’s capacity will increase to 15,967, taking the overall stadium to 61,015 – another significant step in lining up the club’s ambitions on the pitch with those off of it.

Work on the upper tier and the new roof is currently ongoing and with the finish line soon in sight, the anticipation to see the final product is growing.

And thanks to 3D Digital Venue, we can see what the new Anfield Road End is to look like from different angles within the stadium.

From the Main Stand, you can appreciate the depth and height, 39 metres tall to be exact, and how the obstructed views from the back of the bottom of the Anfield Road End is no longer an issue – hallelujah!

You can also see on the right-hand side the new hospitality suites that nestle under the top tier, with Liverpool to have 1,800 seats with sports bar lounge/hospitality facilities.

That means away supporters will continue to be housed on the left, next to the Main Stand.

The view from the Liverpool dugout is impressive, with Anfield certainly to feel more enclosed and sheltered:

As for what the view is like from the seats in the upper and lower Sir Kenny Dalglish Stand, it’s imposing, to say the least.

The Main Stand and Anfield Road End will be seamless next to one another and the cauldron of noise is going to be taken up a notch:

And finally, a closer view offers more of a sense of depth to the new stand – although the advertising hoardings will certainly not be for New Balance.

Its unveiling is going to be here before we know it and while these rendered images of the new stand are impressive, they’ll have nothing on the real thing.

Anfield will never be big enough for Liverpool but this is a hugely exciting step for the club and the fans.