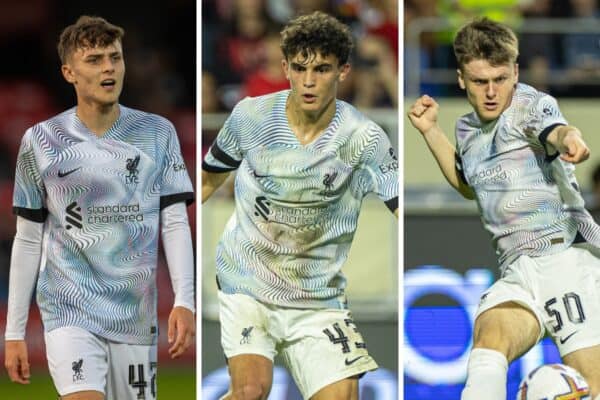 The kids showed, once again, that they are more than alright as Liverpool closed out their trip to Dubai with a 4-1 win over AC Milan, with three teenagers catching the eye.

Much like their first friendly in Dubai, Liverpool took the lead early doors, this time off the boot of Mohamed Salah after an eye-catching adventure from Joel Matip.

Alexis Saelemaekers pegged the goal back on a rare foray forward for Milan, but Thiago then had something to say about that with a sweet strike from outside of the area for 2-1.

It was then Darwin Nunez‘s turn as he capped off his first minutes on return from his World Cup duties with a brace, thanks to sumptuous work from both Bobby Clark and Ben Doak.

Jurgen Klopp made 11 changes in the second half, meaning the Reds used 22 different players in their victory, which was then followed by a defeat in the penalty shootout.

Liverpool fans were happy with what they saw, notably from Joel Matip, Stefan Bajcetic and a couple of exciting teenagers, as the curtain fell on the winter training camp in Dubai.

After missing 10 games before the World Cup break, it was pleasing to again see Matip on the pitch and reacquainting himself with the adventures we all love to see him enjoy:

Joël Matip is a special player, I think a lot of people forget how good he is when we have Virgil and Ibou.

As funny as they are, those centre-forward-like runs from Joel Matip have been a massive miss for Liverpool in recent months.

Great to have him back. It promises to be a huge second half of the season for the defender.

Is Joel Matip the Luis Diaz replacement? Not for me to say.

No defender brings the ball out from the back better than Joel Matip in world football.

Bajcetic locked in at City next week?

The 18-year-old impressed against Lyon and did so again on Friday, firmly putting his hand up for a starting spot against Man City next week:

Stefan Bajcetic’s ability to receive the ball in tight spaces and use his body position & first touch to get out of it, is a joy to watch.

Bajcetic with nice little Thiagoesque turn out of trouble. He's been paying attention in training

Bajcetic has so much potential

Bajcetic doing himself no harm to win what is an up-for-grabs starting spot against Manchester City; I think he will.

Nunez has the kids to thank

Nunez was on the pitch for 31 minutes and finished his day with two goals, with Clark and Doak providing the final pass – to the delight of many.

Will they too get a chance against City:

It's awful defending, but I love that from Doak. Nice to a winger on his "natural" side at defenders

Nunez is back ?
Great weighted pass from Bobby Clark ? pic.twitter.com/vVuLZWvfEJ

Ben Doak, Bobby Clark, Bajcetic we will be seeing against Man City in the league Cup. Top Talent.

Two Darwin Nunez goals and two wonderful assists. The first was a gorgeous pass from Bobby Clark. Magic technique. The second by Ben Doak who wants to take on the world with every touch.

Ben Doak such an exciting prospect! And, that pass by Clark for Nunez, wow! Get in Reds

The Reds’ time in Dubai is now in its final hours with a return to the UK to follow ahead of a long-awaited return to competitive action against Man City in the Carabao Cup on Thursday.