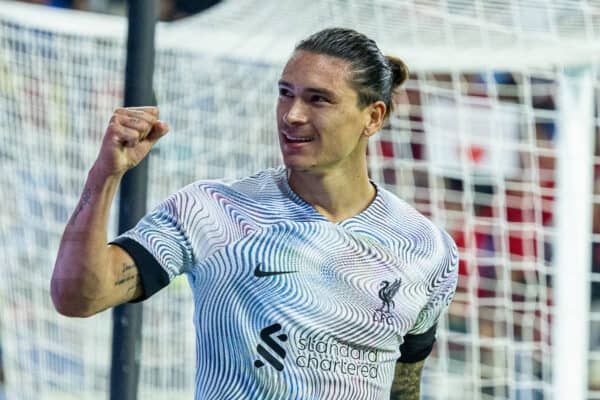 Liverpool concluded their time in Dubai with a 4-1 win over AC Milan on Friday, with Darwin Nunez hitting a second half brace in his first game since returning from the World Cup.

The only change from the Liverpool team that started against Lyon saw Alex Oxlade-Chamberlain come in for Fabio Carvalho on the left side of the front three. There was no reunion with Divock Origi, with the Belgian not in the Milan squad after picking up an injury in a friendly with Arsenal earlier this week.

Joel Matip created Liverpool’s opener five minutes in, with the centre-back producing one of his trademark marauding runs forward, combining with Roberto Firmino, before setting up Mohamed Salah for an easy finish from close range.

The Reds dominated the early stages, with Milan’s equaliser coming against the run of play just before the half hour mark. Andy Robertson was unable to clear a diagonal ball played in behind him, with Alexis Saelemakers collecting, before cutting inside and placing his left-footed effort past Caoimhin Kelleher.

Liverpool continued to push, and just over 10 minutes later, Thiago put them back in front firing home an excellent strike from the edge of the box to give Liverpool a deserved lead at half-time.

Thiago and Stefan Bajcetic were perhaps Liverpool’s standout players in the first half, with the latter showing maturity beyond his years in midfield, having been handed a second consecutive start.

There were no changes at half-time, with Klopp preferring to hand the majority of his players 60 minutes ahead of next week’s return to competitive action.

Nunez was one of six players to be introduced just before the 60 minute mark, with Adrian, Melkamu Frauendorf, Kostas Tsimikas, Naby Keita and Carvalho also coming on at that point, before Nat Phillips replaced Matip shortly afterwards.

Unlike the Lyon game, Liverpool were able to maintain their intensity off the ball despite the changes, and Klopp will have been pleased with his side’s pressing game throughout.

There were more substitutions later in the half, with Dominic Corness and Bobby Clark replacing Bajcetic and Harvey Elliott, and it was Clark who played a sumptuous pass to set up Liverpool’s third, with the Uruguayan making his finish look easy.

Ben Doak was next to be introduced in place of Salah, with the 17-year-old making an instant impact. Shortly after hitting the post, he raced down the right wing before picking out Nunez for a simple tap in, with Klopp applauding from the touchline.

The Reds were on the losing side of the mandatory penalty shoot out, with Tsimikas and Keita seeing their efforts saved, and Milan winning 4-3 on spot kicks.