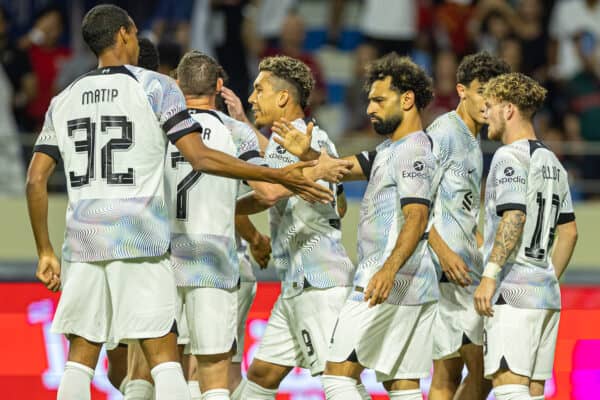 Liverpool took advantage of the World Cup break by spending 12 days in Dubai for a valuable mini pre-season, which saw 26 players feature across two friendlies.

The domestic calendar was put on hold in mid-November to cater for the World Cup in Qatar, enforcing a six-week break between one first whistle and the next for Liverpool.

Those who did not feature in the tournament were afforded a timely break before reconvening in Dubai for a warm-weather training camp and two friendlies.

The Reds lost one, against Lyon, and won the second, against AC Milan, but the results were secondary for Jurgen Klopp as all he wanted to see was the right practices in place before competitive action returns.

He had a sizeable squad to work with, with only six senior figures not taking part due to the World Cup.

With the camp now over and the Reds now turning their attentions to their Carabao Cup clash with Man City on Thursday, here are some of the key numbers from Liverpool’s time in the UAE.

Days spent in Dubai for the warm-weather training camp and friendlies.

The initial squad was made up of 33 players, which included the likes of Diogo Jota, Arthur, Kaide Gordon and Marcelo Pitaluga – all of whom worked on individual rehabilitation.

The different players credited with an assist: Salah, Matip, Clark and Doak.

Player to return early from the World Cup after Darwin Nunez‘s Uruguay were knocked out at the group stage.