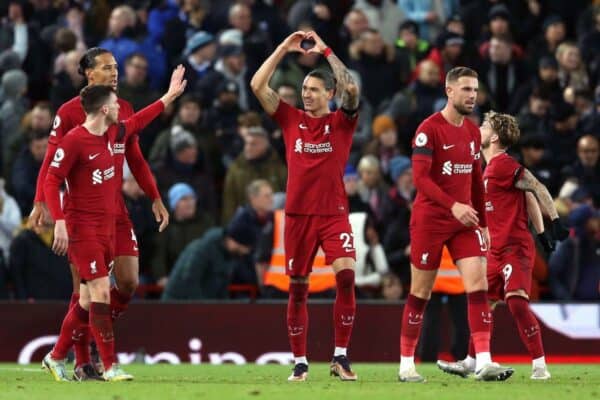 Winning without scoring a goal to call our own, on a night when Liverpool’s first half performance was largely abject.

Thankfully, our visitors came bearing an array of gifts that led to a fourth Premier League win in succession for Jurgen Klopp’s team, one which took the Reds – at least temporarily – to within two points of the top four.

The day before Leicester City came to Anfield I was locked within a blizzard of reluctant communication. This was inclusive of a trip to the bank to deposit some money, a task that was muddied by a bank clerk who clearly resented having to work the days between Christmas and New Year. She essentially set her stall out to be as unhelpful as possible.

This was followed by an aggravated reaction from the woman that was fielding enquiries on the front desk at my dad’s doctor’s surgery, who had booked him a new patient review, even though he has been a patient of theirs for over five and a half decades. She essentially set her stall out to be as irritable as possible, at least until realising there had been an admin error on their side of the window. Yet another individual who could barely conceal the fact that she too resented having to work between Christmas and New Year.

During the first half against Brendan Rodgers’ side, Liverpool’s players struck the startling image of a collective that also resented being compelled to work the days between Christmas and New Year, none more so than when they let Kiernan Dewsbury-Hall plough through on Alisson and the Kop end to open the scoring in the fourth minute.

Sluggish off the ball, unimaginative in possession, chasing shadows when out of possession, for much of the opening 45 minutes Liverpool were outwitted by Rodgersball. Leicester were compact of shape, punchy with their passing, and excellent in their movement. Basically, they were everything that we weren’t.

Then came the double intervention of the Belgian international Wout Faes, with an impressive seven-minute brace of own goals just before the interval, the first an improbable lob over a stunned Danny Ward, the second drenched in what seemed an almost unnecessary expression of misadventure.

It all made for a glorious twist that lodged the tired old poverty ballads in the throats of Leicester’s habitually rancid travelling support.

Poor Faes, it was difficult not to feel at least the mildest pang of sympathy for him, yet it was impossible not to embrace the humour of the Kop imploring him to “shoot” when the ball rolled into his possession for the first time during the early exchanges of the second half.

Ironically, one of the first things he did after the resumption was to complete a backpass that could have been reasonably classed as another shot on target for Liverpool.

Just what would the criteria have been had he completed a hat-trick of own goals? Would Faes have been handed the match ball to keep? Presumably signed by all the Liverpool players.

Faes’ importance shouldn’t be flippantly downplayed though; as the ball looped up and over Ward’s head for the equaliser it came at a time when Liverpool were showing very little in the way of endeavour in finding a more orthodox route back into the game. Leicester were deservedly ahead at this stage, and even the basics seemed beyond us.

Midfield was yet again a cause for concern. Jordan Henderson was too easily breezed past at times, and passes were misplaced all too regularly, while Thiago surprisingly seemed to spend much of his time trying to rectify his own and his teammates unforced errors. Meanwhile, Harvey Elliott too often led himself into situations where he felt duty-bound to fly into uncompromising challenges.

The second half was immeasurably better than the first in this respect, but we never dominated the centre ground and an alpha midfielder in red was absent throughout. Everything about Liverpool’s play was disjointed in the first half, and the front three were given little in the way of supply and support.

Reassuringly, Darwin Nunez again made a regular nuisance of himself, and another game where he could easily have ended it with a couple of goals and an assist to his name. He literally spooked Faes into converting Liverpool’s winning goal.

Increasingly adored by most match-going Reds, it is his appetite for effort and his indefatigable spirit that is so likeable.

Yes, there are the wayward shots on goal and the near misses, but there are also those unstoppable bursts of pace when he drifts left, and the facial expression that seems permanently set to incredulousness.

Opposing supporters brand him a shit Andy Carroll, but there is no way in the world that Nunez has ever heard of Andy Carroll, let alone modelled his career upon his works. We are still only seeing the tip of the iceberg.

Overall, Liverpool struggled with the sheer unpredictability of Rodgers and Leicester. Together they have looked both world beaters and dysfunctionality incarnate. They have swung from FA Cup winners and Champions League potential to relegation candidates.

Within the space of a few days over Christmas they have capitulated at home to Newcastle and then come to Anfield where they have given us the run-around for at least half the evening.

Just what the watching Cody Gakpo made of it all is unclear. He should probably beware of the chaos to come, though.

Feet up for a whole two days, Liverpool’s next assignment is away to the very impressive Brentford, a team that went into the World Cup break on the back of picking up a win away to Man City and has just taken four points from a possible six in London derbies against Tottenham and West Ham.

We’ll need to crank up our levels of focus if we are going to make it five Premier League wins on the bounce.