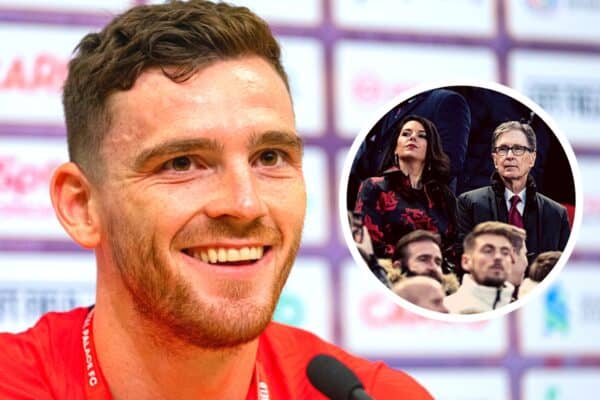 Andy Robertson on Liverpool sale talks – “We can’t control anything”

With the future of Liverpool unclear as FSG seek investment, Andy Robertson believes the players can only “sit back” and trust the process.

Fenway Sports Group have reshuffled their hierarchy amid talks over a potential sale of Liverpool, with president Mike Gordon stepping back to focus on investment.

That has left the state of the club in limbo, with interest from consortiums from Germany, the United States and a joint Saudi-Qatari group, while the latest development suggests a partial sale may be more likely.

While that uncertainty could impact the dressing room, Robertson has insisted that the focus remains solely on the pitch.

“Honestly, we just focus on playing football,” he told the Liverpool Echo.

“Obviously you see the stuff in the press and you see stuff around potential new buyers or that the club has been put up for sale and things like that, but we can’t control it.

“There’s enough work on the pitch for us to not have to worry about anything else and yes, whatever else happens will happen.”

During media duties with the Netherlands at the World Cup, Virgil van Dijk hinted at a desire for resolution when it comes to the club’s future.

The centre-back told reporters that “hopefully everything will be sorted and clarified when I am back,” but stressed he had “full trust” in the higher-ups.

Robertson has echoed the latter, issuing praise to FSG and leaving sale talk to “people who are a lot more intelligent” than himself.

“I think the owners we have got have been very successful at this club and if they want to move on or whatever then fair play to them.

“And if things need to be controlled off the pitch then we will let the people who are a lot more intelligent than me and higher up than me to sort, that’s for sure!”