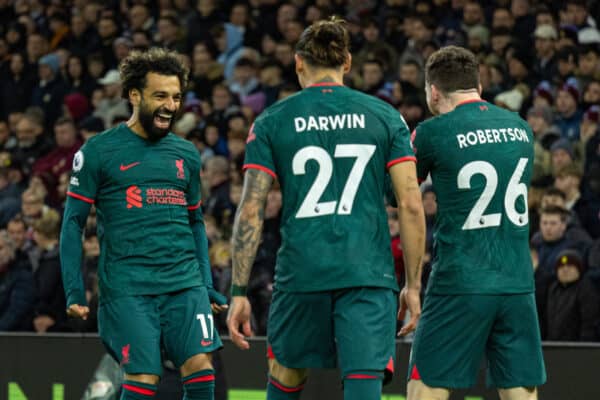 Liverpool’s first Premier League game back after the winter World Cup had a mix of everything: complete control for a while, chances against, and a first-ever goal for a teenager.

There was an early chance from Andy Robertson‘s cross which saw Villa’s stand-in goalkeeper Robin Olsen collide with centre-back Tyrone Mings and from the resulting corner came the opening goal.

Trent Alexander-Arnold beautifully recycled the ball from the middle of the pitch, Robertson’s touch put the ball across goal for Mo Salah to finish.

That goal meant Salah equalled Kenny Dalglish‘s goal tally for the club, while it moved Robertson to top of the assists by a defender in Premier League history.

It was an entertaining game, with plenty of chances arriving. Joel Matip headed in but was offside, while Darwin Nunez caused problems and got in the right places but couldn’t find a finish.

It was 2-0 before half time when Van Dijk eventually finished from a corner, his left foot strike doubling the lead.

A superb run from Salah early in the second half almost resulted in a third, but the home side were on top in the opening exchanges after the break.

It was no surprise then, when Villa got a goal back via a header from Ollie Watkins just before the hour, heading home a cross from Douglas Luiz.

Liverpool had been slow after the interval and needed to wake up. Klopp brought on Naby Keita and Harvey Elliott to get fresh legs on the pitch.

Another big chance arrived for Nunez when he raced away with 15 minutes to go, but again he couldn’t find the target and dragged his shot wide.

Stefan Bajcetic and Joe Gomez replaced Alexander-Arnold and Henderson, and within minutes teenager Bajcetic had his first goal in professional football.

The 18-year-old showed great composure to collect the ball and finish past the defenders on the line.

Happy to have the three points in the bag, Klopp used the final minutes to give 17-year-old Ben Doak his debut from the bench.

The win, combined with Spurs’ draw earlier in the day, means Liverpool are five points behind fourth place with a game in hand.

Next up is an out-of-form Leicester at Anfield on Friday night.