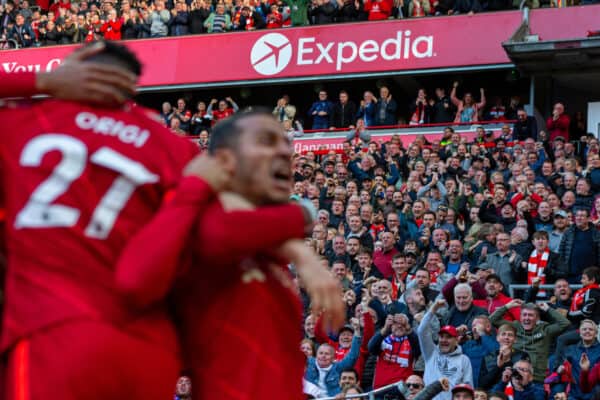 What it means to be a football fan is changing rapidly, and here, Ross Chandley explains the value of stepping back from constant consumption.

This article comes from two different places. Firstly, a long social media break which, at this point, isn’t a break, it’s a long detox with no end date on it.

It doesn’t require one. as it feels so good to be away.

I really can’t recommend it enough. Your experience of football and the things that surround it will be increased tenfold if you simply sacked off Twitter, trust me.

Listen to the thoughts and opinions of those you care about, those you respect and most importantly the ones that can hold a proper conversation with you.

Sometimes I don’t even know the team until the game has kicked off.

Then I miss all that cryarsing when it does come out and x player starts over another, I miss all the ‘rumours’ circling social media ‘my mate’s, nan’s, next-door neighbour’s cat said Milner might be starting’ and the needless meltdown.

It’s team news, you can’t do anything about it.

The second place this comes from is the recent article from Gareth Roberts. If you haven’t read it, I highly recommend you do – after reading this, of course!

It resonated with me. Deeply. For all the reasons he mentioned, football is becoming a bit unrecognisable. The love for the sport is still there but everything that surrounds it is just becoming a bit tiring.

Maybe this is why AFC Liverpool and City of Liverpool FC exist.

I don’t know where I stand on ownership. A small part of me really doesn’t care. I don’t follow Liverpool for billionaire owners, I follow for the team.

But having said that, I don’t want to be sportswashed. I would want owners with the right morals that wouldn’t offend and deter sections of the fans, unlike other clubs.

The flip side to that and one in which some would argue is that FSG don’t care and, to be honest, they’d be right.

They are terrible at reading the room and I’ve no doubt if there hadn’t been kickback from the fans they’d have succeeded in some of the strategies they wanted to implement.

They aren’t the worst, but they can and could have been much better.

Here’s the biggest issue, though. Liverpool fans throughout the years have been through different things, they’ve experienced the club and football from a different perspective – different owners, different expectations and different challenges – and no one wants to understand the other side of it.

You are either a ‘Top Red’ or you sit at home in your mum’s basement touching yourself to BBC’s gossip column. There is no in-between.

Except there really is.

Language is vitally important here. I was going to title this ‘Top Reds vs. Bottom Reds’ but it shouldn’t be a case of ‘versus’, it should be the opposite.

Now, Liverpool fans of a similar age to me will have seen us not be very successful for a long time; we’ve lived through Roy Hodgson, Paul Konchesky, Hicks and Gillett etc.

Let me tell you, that shit grounds you. It makes you appreciate good things when you have them. Not ‘settle for mediocrity’ or anything like that, just literally enjoying the good times.

The younger fans need to understand where the likes of me are coming from. Not agree, just understand. Know there’s a different take. Not right or wrong. Just different.

For balance, I think it’s the same the other way. There’s constant shit-slinging from both sides. It shouldn’t be ‘sides’, we support the same club. Stop arguing.

The younger generation of fans

Think about it. If you’re under the age of 23, maybe, you probably don’t know any different than FSG at Liverpool, the sheikhs at Man City, PSG being loaded with a member of UEFA on their books, Chelsea pre-Abramovich. I could go on.

At that age I didn’t care about which person owned what club and how much money they had. Owners have been thrust into the limelight since the attempt at the Super League, possibly before that, and they are almost celebrities in their own right.

But as more clubs are bought by states with bottomless cash reserves, the competition increases and that strive for success can be clouded by ownership and money.

But in the defence of a younger generation, the prism in which they’ve absorbed football is completely different to mine. That isn’t their fault.

I didn’t grow up with social media, with spending FIFA points to get the best team I could to get for success or with the type of owners in football that are doing the rounds now.

To Gareth’s point, football is becoming a toy for these owners. Corporate seating is having an impact on atmospheres, prices are going up and soon enough your money and my money won’t be good enough.

The hyper-commercialisation train doesn’t stop for anybody and it shows no sign of slowing down soon.

But if you want the best players, on the best wages, or close to, and you want to compete with a state, then you can’t have it both ways, sadly.

I wish there was more social media anger about the lack of FFP and state-owned clubs, rather than the cry for another multi-billionaire.

But such is life, that isn’t the way it has panned out nor is there much anyone can do about it now it’s already gone this far. If UEFA, the Premier League and other governing bodies had a backbone we might have had a chance, but it’s gone too far now.

There’s a need from everyone to be right. ‘My way is better than your way, if you don’t agree with me you aren’t a fan’, etc.

Tweeting #FSGOUT isn’t a conversation. I’ve zero issue if that’s how you feel, but have a conversation about it. And if you aren’t ‘FSG out’, that doesn’t mean you worship the ground they walk on.

Then there are condescending messages from people back to those people. When has that ever helped a conversation?

The truth is, there is no right and wrong answer. We all want this club to be successful, just because you have a different vision or path as to how we get there doesn’t make you right and someone else wrong.

None of us know anything. We’re literally just guessing.

The football landscape has vastly changed since I was a kid and no doubt it will do so again. It’s possible to understand the experiences of another Liverpool fan.

I can be grateful for our recent success and still want to improve without being state-owned.

Someone younger than me, who might not care about anything but money and transfers because that’s how they see the route to success, doesn’t need to be someone I agree with, but I can still listen to a sensible argument about it.

If you’d like a bit more perspective, talk to someone who supports Bury, Bolton and various other clubs down the football pyramid and ask them about the impact billionaires in the upper echelons of football have on their club.

Then you’ll be grateful.

Anyway, if you just didn’t bother with social media you’d miss all this and enjoy the football more. Trust me.

Up the middle Reds.

* This is a guest article from Ross Chandley.