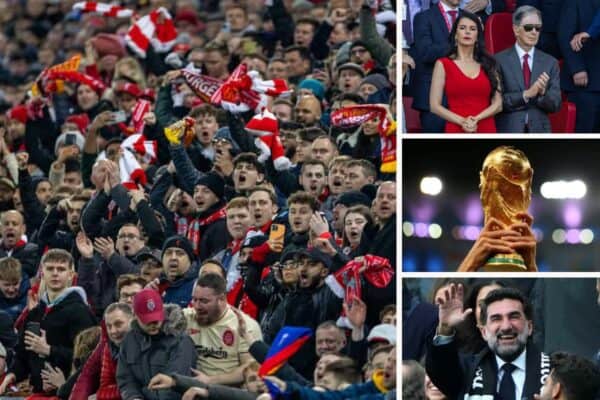 FOOTBALL. The habit of a lifetime. An obsession lived and breathed; an all-consuming priority never too far away from thoughts. Could it ever be any different?

Reaching for your phone the moment your eyes blink open to check the gossip, scanning Twitter for freshly-served football beef, musing on quite how you’re going to pay off – or pay for – the latest tax on your loyalty. It’s always there: omnipresent, occupying, worming its way into everyday life.

We call it love. We sing about it being so: We love you Liverpool, we do. We call ourselves fans – “fanatics”: We are loyal supporters, fanatics everyone.

It’s our tribe. Our place. Our people. Where we find some meaning.

And, whatever happens, we always come back. We can feel used and abused. Frustrated. Even furious. Prices go up. Greed grows. The squeeze continues. See you in August, mate.

For many of us, it’s a way of life. Football is what we talk about. Online. Offline. It’s what we read about. Watch. Listen to. Going the match is where we see our mates. Our pub. Our club. Our disco. Our theatre. Even our holiday. An escape.

We’re locked in. We love it. And we’re proud of it. And don’t the capitalists that have us all on strings know it all too well? You might not buy kits anymore, but your kid wants one. And yes, the new one. Every season. Then there’s the tickets, the transport, the TV subscriptions. Food, drink, accommodation.

All the costs and associated costs keep on rising. So do the footballer’s wages. So do the transfer fees. It keeps on turning, becoming ever more bloated. And still we pay. Hoping and dreaming and ignoring the bits we don’t like. That buzz of the wide-eyed supporter taking it all in as new, it will come back… right?

Or, is there a tipping point? Is there a ‘enough is enough’ moment after living and loving something for so long?

Are there, in fact, many of us now teetering on it, constantly being pulled back from the precipice? Wondering whether to edge away.

I’m going to nick an analogy from a friend. We were discussing anger and how, even in the most placid and patient, it can suddenly flare up and explode, seemingly from nowhere.

When that happens, it can seem sudden to the onlooker; an overreaction, something we instantly judge. Yet often there is much more to it. There has been a build up over time.

Is that bubbling up of suppressed emotion always something that the person doing the raging should regret? Or are there times when most fair-minded people, armed with all the facts, would actually say, “Well, fair enough – that’s a lot to take.”

My mate compared it to a coffee-shop loyalty card – each small cup bought is another stamp in a box. Something little served up regularly results in something bigger. Eventually, your card is full – you can stamp no more. And so, there is an end result.

In the case of a tipping point, instead of lots of small problems, you have one big one. And you don’t even get a free coffee for it. You just have no room for anymore. Something has to give.

How many that have followed football like a religion for a lifetime now have a close to full card? How many feel a little tired or weary about it when once it was the be all and end all?

Remember when Match of The Day was a must watch every week? When it seemed like all football was good football? Nostalgia. Romanticism. Maybe. But when some clubs are now little more than a plaything and PR for a murderous regime that shouldn’t have its hooks in a club here, it kind of takes the shine off doesn’t it?

What was once an immersive experience is in danger of becoming wallpaper.

It’s not just owners and the rules or lack of around them. When you consider the number of potential scratches to the metaphorical silver boxes for most football fans, it’s a fair assumption there will be many supporters left wondering what they are signed up to in 2022.

Well for starters and in no particular order:

I could go on. And no doubt you could too. So, what’s the final scratch for you? What fills that last square when you cash in your ‘get out of football free’ card and turn your attentions elsewhere?

I suspected the nightmare of the Champions League final in Paris might be the last straw for many Liverpool fans. The result of the investigation, or the reaction to it, might also be depending on how it goes.

Certainly, many are still wondering whether another final organised by UEFA is worth engaging with. And who can blame them?

Hundreds of pounds spent. Time off work. Money that could have been channelled elsewhere devoted to supporting your team on the biggest stage. And what in return? Lives put at risk. Utter contempt. Denial of basic human rights. Treatment that in any other societal setting would lead to people losing their livelihood and even their liberty.

And after all that? Being told that it’s your fault. That you’re the problem. That this was a situation of your creation. That it’s typical of Scousers.

The fightback is heartening of course. The response from fans and some of the media brilliant. But the fact it’s required in the first place and the fact lies were so readily lapped up once again (yes, you Jake Humphrey) well maybe that scratched a few more boxes.

The white elephant of The ESL was another such moment. It might now lie left to die on a digital scrapheap, but it was an indicator of how the rich who run the clubs at the top of the game really view those who support them. UEFA’s plans are hardly much better. And, like FIFA, like the FA, like the Premier League, the actions of those running the game all smell a bit funny a bit too often to say the least.

A thing of the past?

So, what keeps us holding on? Why do we stay? Unlike the free coffee or the outburst of anger, there isn’t a total reset that puts it all right.

Instead, maybe just one or two of those stamps that test our tolerance levels are removed by the good times; just enough to suggest things might change. Moments that restore the silver for another scratch. That rub out the ink of another desperate football experience – leaving the box empty for another blow.

For us, at Liverpool, we’ve watched a fantastic incarnation of our side lift two cups this year and come incredibly close to two more. We got to be part of parade too, a civic coming together in celebration of a glorious team.

It’s those times that you imagine people in power in football bank on as being enough to whitewash the rest. For all its ills the beautiful game can still be just that. And after a lifetime of commitment, we’re hardwired to search out the good bits.

My teenage son has finally started to catch the football bug and celebrating a 4-0 victory over Man United with him by my side on The Kop was special. Really special.

But I can’t help thinking: What am I getting him into here?

He asked to go to Paris. And as a father who loves the bones of him, I couldn’t be more delighted that I wasn’t able to oblige.

Would I want my son to be tear-gassed, kettled, crushed, pushed around, placed in danger just because he wants to watch Liverpool? Of course not.

But would I want him to witness what I did in Istanbul? That collective joy. That rush of adrenaline. That highest of highs. Again. Of course.

But will he? Can he? Will I be able to afford to take him? Will he be able to pay for himself? Will Liverpool even be competitive? Who will the owners be? How will the treatment of fans improve? Is the Paris investigation a box tick? What will truly change?

Perhaps the biggest question of all. Will I have checked out of it all by then?

The young boy with the posters on the wall, the replica kit in a box, filling Panini sticker albums and reading Shoot and Match is a long way back now.

He didn’t know about leveraged buy outs. About Tom Hicks and George Gillett. About The Glazers. About Mark Roberts. About net spend. About FSG Out. He didn’t know about the dark side of football. Corruption? Bribes? No, no. Then, it was magical. Pure. The FA Cup was special. Heroes were like the blokes who wear capes. Clubs could do no wrong. And feeling part of something standing on The Kop was unrivalled.

There are times when the sun still shines. Times when football lifts you up and takes you somewhere else. There are still joys to be had from the game but plenty of those squares have undoubtedly been scratched off.

I don’t think I’m the only one wondering what is coming next and what could be the tipping point.