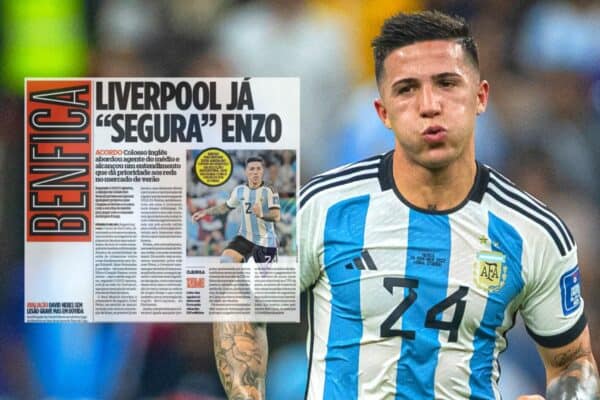 All the talk around Liverpool’s search for midfielders has centred around Jude Bellingham in recent weeks, but links to Benfica and Argentina’s Enzo Fernandez aren’t going away.

Last week, Record, one of the leading sources for news in Portugal, claimed Liverpool had been in contact with Benfica regarding Fernandez’s availability, with the 21-year-old impressing for Argentina at the World Cup.

Other reports in Spain suggested the Reds had come to a pre-agreement to sign him next summer.

On Monday, there were similar claims from Argentina, with Dario La Capital claiming Liverpool have a deal agreed to sign Fernandez, and another source, Varsky Sports, suggesting Jurgen Klopp‘s side “have approached the player with a contract offer” but are not yet in negotiations with Benfica.

While an agreement would seem unlikely at this stage, on Tuesday, Portuguese publication O Jogo, have backed up claims that Liverpool already have a deal, of sorts, in place.

They say the Reds have made a “promise to match” any offers for Fernandez from elsewhere, with the player also keen on the idea of a move to Merseyside.

The story goes as far as to say the Argentina midfielder, who will feature in their World Cup semi-final against Croatia on Tuesday, “is already in Liverpool’s hands.”

If a move were to happen, it would likely be next summer rather than in January, with Benfica said to be asking for €120 million for a deal at the start of next year.

The theory is that Liverpool will hold out until next summer in the hope of getting him for a cheaper price, but that’s where we begin to question this story.

With Fernandez impressing at the World Cup, and with Real Madrid supposedly among his other suitors, is his price tag really likely to decrease between now and the end of the season?

Then there is the Bellingham factor – can Liverpool really afford both? An outlay of around £200 million on two players would seem steep under the current ownership regime.

Nonetheless, Fernandez certainly seems to be a player on the club’s radar, with links to the player going back to August, when Sky Sports‘ Melissa Reddy said Liverpool had “kept a watching brief” on Fernandez before he left River Plate for Benfica last summer.

Bellingham, Fernandez, both, or neither?