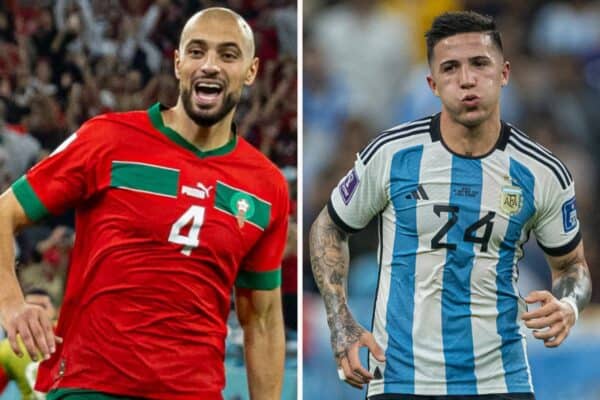 Jude Bellingham is the player on every Liverpool fans’ lips at present, but there are two other midfielders at the World Cup who continue to be linked with the Reds.

Earlier this week, reports in France stated Jurgen Klopp had met with the entourage of Fiorentina and Morocco midfielder Sofyan Amrabat, and while the reliability of those claims is questionable, a typically good source of Liverpool transfer news continues to link him with a move to Anfield.

According to Sky Germany‘s Florian Plettenberg, there have been talks between Amrabat and Liverpool, with sporting director Julian Ward said to be “a big fan” of the 26-year-old.

He adds that Fiorentina are reluctant to sell Amrabat in the January transfer window, but the player “wants to make the next step” in his career by next summer at the latest.

News #Amrabat: Yes, there were talks with #LFC! More could follow. Ward is a big fan of the 26 y/o machine from Morocco. At this stage @acffiorentina doesn’t want to sell him in winter. It’s a poker. Amrabat wants to make the next step in summer at the latest. @SkySportDE ?? pic.twitter.com/jY4vh9NVI6

Elsewhere, Argentina midfielder Enzo Fernandez, who featured in Friday’s dramatic quarter-final victory over the Netherlands, is another who the Reds are said to hold an interest in.

Portuguese publication Record, who were a leading source of news when the Reds made their move for Darwin Nunez last summer, say Liverpool have been in contact with Benfica regarding Fernandez’s availability.

On Friday, AS journalist Manu Sainz went as far as to say the Reds had reached a pre-agreement to sign the 21-year-old, who has also been strongly linked with Real Madrid.

That report should be taken with a very big pinch of salt, but the Argentina prospect certainly seems to be a player Liverpool have kept tabs on.

Fernandez, in particular, would command a sizeable transfer fee, and it seems unlikely Liverpool would be able to afford both him and Bellingham. Amrabat, however may be a more affordable option, with Plettenberg previously stating the Moroccan could be available for offers around €30 million and above.

Plettenberg has also published an update, of sorts, on the future of Roberto Firmino, with the Brazilian said to be in talks with Liverpool regarding a contract extension.

X News #Firmino: Talks about a new contract have started and running positive. He can really imagine to extend beyond 2023. At least until 2025. Klopps future will have an impact on Firminos decision. Still a top relation between them. #LFC @SkySportDE ?? pic.twitter.com/Y1AQkE8vOj

The German journalist states that negotiations are “running positive,” with the Reds’ No.9 keen on extending his stay until “at least 2025.”

Many had expected this to be Firmino’s last season at Anfield, with a series of injuries seeing him play a bit-part role in the previous campaign.

However, Firmino has been one of the standout performers in Klopp‘s side in 2022/23 so far, having already scored nine goals in all competitions.