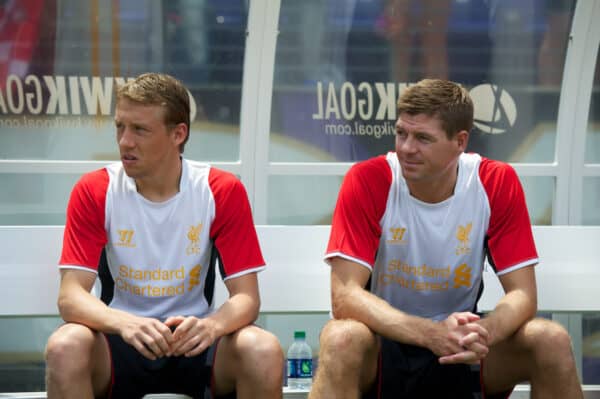 Steven Gerrard and Jordan Henderson have both shown their support to ex-teammate Lucas Leiva after he was instructed to stay away from football for two to three months due to a heart problem.

It was disclosed on Wednesday that the Liverpool cult hero was pulled out of pre-season training with Brazilian side Gremio after tests revealed a heart issue.

The 35-year-old was undergoing routine tests ahead of his second season with his boyhood club when an “alteration of the cardiac rhythm” was detected, requiring further tests and treatment.

A concerning development that has now seen him instructed to “stay away from high-performance physical activities for a period of two-three months,” with further tests to follow in 2023.

“The Medical Department of Gremio Foot-Ball Porto Alegrense informs that, after changes were diagnosed in one of the routine pre-season exams of athlete Lucas Leiva, he was subjected to additional assessments and referred to a specialist s in the area of Sports Cardiology

“Completed the assessments, conducted by doctors Leandro Zimerman and Ricardo Stein, it was determined that the athlete should stay away from high-performance physical activities for a period of 2-3 months, during which he will be monitored, mo constantly supervised and guided by the club’s medical team and the the above mentioned specialists.

“After this period, Lucas Leiva will be subjected to further examinations and assessments to determine the evolution of his clinical framework.”

Lucas shared the statement alongside a short personal message on social media, which thanked “all the fans” for the “love and positive messages” he has received following the initial news:

“To all the fans, I thank you for the love and positive messages I have received in the last few days.

“Over the next few months I’m going to take care of my health and I count on everyone’s understanding.”

Both Gerrard and Henderson, who shared the pitch with the Brazilian 186 and 109 times respectively at Liverpool, commented on Lucas’s Instagram post, posting the praying hands and love heart emojis.

They were two of countless others who were quick to show they were thinking of the 35-year-old.

Lucas rejoined Gremio earlier this year after his five-year spell with Lazio came to an end in the summer, taking his career tally of games to 583.

The hope is that he will be able to add to that figure in the near future. Wishing you all the best, Lucas.