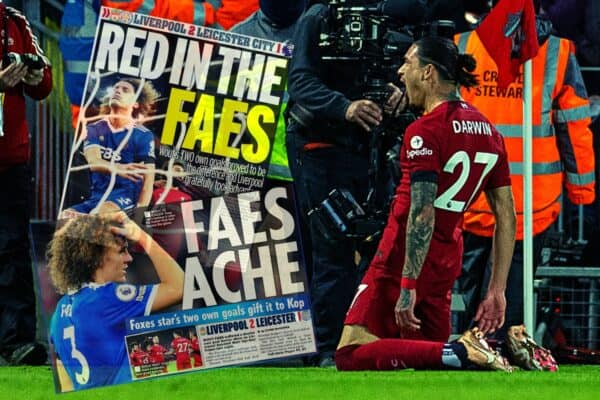 Liverpool were poor despite beating Leicester 2-1 at Anfield, although Thiago‘s brilliance didn’t go unnoticed by some of those in the media.

The Reds never really got going at Anfield on Friday night, falling behind to Kiernan Dewsbury-Hall’s early strike and struggling to respond.

Thankfully, Wout Faes’ comical brace of own goals saved Liverpool’s blushes and they managed to seal an ugly-but-crucial three points.

Here’s how the media reacted to the win.

It was a wholly unconvincing performance by Liverpool…

Richard Jolly of the Independent felt the Reds were lucky to profit from Faes’ nightmare display:

“If it was seven minutes of madness, Liverpool appreciated it.

“They had been dreadful for much of the first half; Andy Robertson and Jordan Henderson had set up Leicester breaks with horribly misplaced passes and each may have been culpable for the early opener.

“One of Liverpool’s biggest problems all season has been their weakness in defence. It was an issues that reared its ugly head just four minutes into the clash against Leicester, with the Foxes taking full advantage.

“Danny Ward‘s long ball forward caused chaos among the Liverpool defence, with Kiernan Drewsbury-Hall running through them unchallenged before slotting the ball past Reds keeper Alisson.

“The visitors continued to take advantage of Liverpool’s weakness at the back, creating numerous opportunities as they pushed forward out wide.

“Arguably, Leicester should have scored more goals with the chances they created, with Liverpool’s defensive issues not going away.”

Andy Hunter of the Guardian said there was a noticeable drop-off from the performance at Aston Villa:

“Klopp had tasked his players with starting with the same intensity and sharpness that underpinned victory at Aston Villa on Boxing Day.

“Leicester’s early struggles against Newcastle on the same day, when they found themselves two goals down inside 10 minutes, had been noted. But so much for best-laid plans.

“It was Leicester, called in on a day off by Rodgers to analyse their Boxing Day failings, who were positive, assured and energetic from the first whistle. They led after four minutes when Dewsbury-Hall took full advantage of a rupture in the centre of Liverpool’s defence.

“Klopp had made one enforced change from the Villa victory with Harvey Elliott replacing Fabinho, whose wife went into labour shortly before kick-off.

“The contrast in performance level was stark, however, with Liverpool lacking cohesion and giving up possession cheaply.”

Writing on Twitter, David Lynch was a little more positive, but also admitted improvements are needed:

There's an awful lot to be said for winning when you're not at your best and that's four victories on the bounce to bring Liverpool back into top-four contention. You'd just like to see them play a little better in the games ahead, though, particularly as Brentford a real test.

The Telegraph‘s Chris Bascombe was another who was under no illusions about Liverpool’s current shortcomings:

“With a fourth successive league win, Jurgen Klopp is slowly repairing the damage of their early season woe, although signs of the return of attacking panache will be balanced by lingering defensive issues.

“Despite creating several chances, Liverpool were grateful for Faes’ generous contribution. His first was the kind of finish which served as a fitting tribute to Pele, with the notable exception of it being in the wrong net.

“Klopp has certainly refreshed Liverpool’s tactical template during the break, but it is a white-knuckle ride watching them, the brief being so focused on high pressing that any misplaced pass can leave them vulnerable.”

Thiago was superb in midfield, though…

“The 31-year-old was asked to be much more than an excellent passer and playmaker – the technical and creative ability for which he is primarily known. Not asked by his manager, necessarily, but by the performances of his fellow midfielders.

“He needed to be dogged, clever, and positionally aware to cover areas that weren’t being covered by others.

“Luckily for the English pair, Thiago was very good. Liverpool’s best player on the night and he needed to be to keep his side in this game and help claim three points.”

Jones was another who hailed an eye-catching and influential outing:

“It wasn’t hard to spot Liverpool’s best player here. He was wearing the No. 6 and doing the work of three men in midfield.

“Thiago struggled at Aston Villa on Boxing Day, but he was back to his best here, and Liverpool were extremely grateful for that.

“The Spaniard was on the ball more than anyone else on the field, switching the play effortlessly, beating opponents with a subtle drop of the shoulder and moving the ball through the thirds with speed and accuracy.

“He kept winning it back, too. He made more tackles and more interceptions than anyone in Red, and drew six fouls as Leicester‘s midfield struggled to get to grips with him.

“With so many of his teammates below par, this was a night where the former Bayern Munich man’s class stood out a mile.”

Finally, the Liverpool Echo‘s Ian Doyle made it very clear on Twitter who he thought Liverpool’s star man was:

There is little time to rest for Liverpool, with Monday’s trip to Brentford looking like an awkward one, especially after their 2-0 win away to West Ham.

Victory in west London would be a perfect start to 2023, though, not to mention a fifth Premier League triumph in a row.