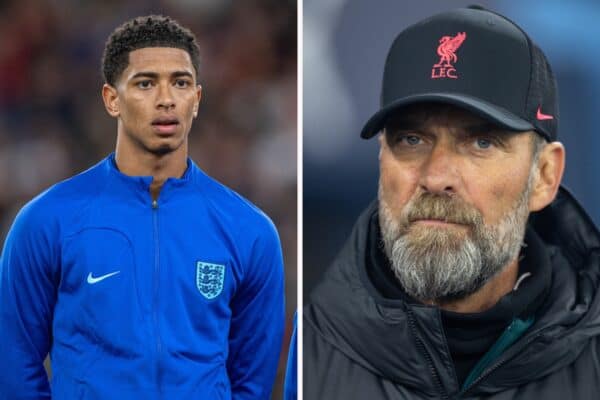 Jurgen Klopp has praised “exceptional” Liverpool target Jude Bellingham, saying that “we don’t talk about money” when it comes to the midfielder.

Bellingham is the priority target for Klopp as he seeks to bolster his midfield in 2023, with a pursuit likely to come to a head in the summer.

The 19-year-old is attracting the biggest clubs across Europe as he shines for both Dortmund and England, but Liverpool are said to be leading the race ahead of Real Madrid and Man City.

Whether Bellingham ends up at Anfield remains to be seen, but there are strong signs that he could become club-mates with international mentor Jordan Henderson.

It is rare that Klopp will indulge the media when it comes to transfer targets, but the fact he was so open and effusive in his praise for the teenager may be telling.

“I don’t like to always talk about money when we talk about a player like Jude,” he said when asked by reporters.

“I think nobody would get even close to the age. [He plays like he is] 28, 29 or whatever. He plays that mature.

“He played an exceptional World Cup, absolutely exceptional. He’s good in so many things and has to improve in other things.

“So that makes a really good player. What can I say? I don’t say anything new.

“I’ve thought that already since two or three years, or since he had his breakthrough at Dortmund. Everybody knows that already.

“But I have no idea what that means for the money side of it.

“I really think if we all want to do him a favour then we just don’t talk too much about money.

“If you’re from an English point of view, don’t throw any hurdles in his development, that would be really cool – wherever he will end up.”

Not only will Liverpool be required to contend with the likes of Real and City in terms of finances, but there is also the matter of convincing Bellingham they are the right sporting fit.

That could give Klopp’s side the upper hand, but any failure to qualify for next season’s Champions League may damage their hopes.

The manager, however, is of the belief that that would not be the case – or at least should not be for players weighing up a move to Liverpool.

“It is, for the club, very important. It’s obviously our main target now,” he explained.

“But you ask from a transfer point of view.

“Again, I think we have a good chance to qualify, generally, for the Champions League.

“If it will happen this year, I don’t know, but we are 100 percent one of the contenders for the next few years again. So that’s how it is.

“If you ask a player and he goes ‘yeah, but next year you’re not in the Champions League, I would prefer to go to a club who plays this year but maybe not next year’, I’m not sure I would want this player still, to be honest!

“I understand it, 100 percent. I want to be part of the Champions League all the time.

“But for the moment we have two pathways still to qualify for the Champions League next year, and as long as that’s the case, I see ourselves as a proper contender.

“If not, then we can speak about that.”